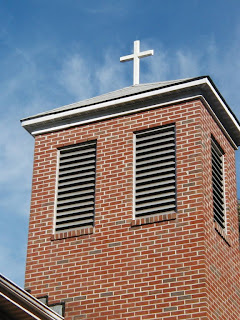 While walking through the exhibition hall at the BGAV meeting last Tuesday I was struck by one display in particular. It was for LivingStone Monastery in Newport News, Virginia. The young man attending the table saw the puzzled look on my face as I read their banner proclaiming the mission of this "Protestant monastery." The young man, a recent graduate of Trinity Divinity School in Chicago, gave me a brochure and the low down on the monastery.
Livingstone opened in 2004 in a building once owned by the Sisters of Poor Clare, an order of Franciscan nuns, who had lived there for 50 years. As the brochure says, "Now a monastery in the evangelical tradition, LivingStone is a religious community called to support the local church, to practice hospitality,and to foster an environment for spiritual formation." The Monastery has an "Abbot," and they conduct "daily offices" at morning, noon, and night.
With a little more digging I found the monastery is connected to Hope Community Church, an "emerging" church type congregation. Most interesting thing here is the fact that this church shares facilities with five partnering churches (including what looks like a conservative Anglican and an independent Doctrines of Grace church) in a "multi-church campus" called Mosaic.
Prominently displayed on the exhibit table was a book by Quaker evangelical mystic Richard Foster. The affable young man let me look at their reading list which had more Foster and the Catholic Henry Nouwen, but it also listed several books by John Piper and even J. I. Packer’s Knowing God.

After a little perusal, I asked the young "monk," "Why do you think that the Protestant Reformers closed down the monasteries as the Reformation got under way?" Why did the former monk Luther marry the former nun Katherine Von Bora and establish their Christian home as "the school for character" (as Roland Bainton puts it in his classic bio of Luther)? I also asked why evangelicals would turn to Quakers or Roman Catholics for lessons on spirituality and bypass our own glorious (and doctrinally distinct) heritage on such matters in the Puritans (none of whom made the reading list).
We have to admit that most evangelical churches are lacking the intimate fellowship, community, discipline, and commitment that these young folk are trying to find in their "monastery." But is such a communal living arrangement Biblical? Shouldn’t these folk be encouraged to marry and establish godly homes where godly children are raised and to join themselves in meaningful covenant to an authentic local church body?
JTR
Posted by Jeffrey T. Riddle at 5:41 PM

Hello. I suspect that you misunderstood something about the "monastery." They are likely part of something called "the new monasticism," which contains both single folks and married couples with families. Google "new monasticism" or "the Prayer Foundation" for more information. I would recommend reading Shane Claiborne's book, The Irresistible Revolution, as well. Christ's peace!

I agree that there are dangers behind "monasticism" as a lifestyle. Forced celibacy being a most destructive danger. The Holy Spirit revealed through Paul that it is a doctrine of demons. Nevertheless, sacrificing father, mother, wife, or children for the sake of the kingdom is praised by Christ (Matt. 19). Paul himself recommended the freedom found in the single life for the freedom it afford to serve Christ (1 Cor 7). Bottom line is, developing a deeper spirituality within the context of a devout community, separated from the cares of this world is a most godly idea which violates none of Scripture. We Evangelicals sometimes hold so tightly to the traditions of our Protestant Popes, that we throw the baby out with the bathwater. Whoever is not against Christ, is for Christ.

I know this is years later, but...the first commentor was correct. My husband and I met, married, and had our first child together 6 years ago while serving at LivingStone Monastery. God Bless.

Now ten years later, suffice it to say the set up did not work and the Monastery is no more. Hope Community Church went bankrupt (distracted by the monastery and the huge, aged space it occupied and the cost of keeping such an old space in good upkeep). It was basically a group of Evangelicals lead by a pastor who was enamored at the "idea" of a monastery but who had no clue about the difficulties of running such a place. With no denominational funding (like the Catholic Church!) it soon became a failed experiment and a lesson as to what happens when a church looks to a building to create a ministry. Buildings don't create ministries, people do. Also monastic life and living in community becomes impossible when, as one of the commentators mentioned, you've got couples courting, getting married and having babies together mixed with single people who's only focus is on the monastery but who were forced to work around the families preferred schedule and needs. Lights out at 11PM could be broken if two people who are seriously dating and planning on getting married want to watch a movie together, snuggling in the chapel - no one else invited. Stupid stuff like that going on. Such an arrangement created the OPPOSITE of monastic life.

so many years later- as a self-proclaimed evolved adult in 2021…
i lived at livingstone 2006-2007. hope community church had been my home church since 1996. at the time i was a 20 year old trying to prove to everyone that i was a good person and constantly sought approval from everyone i came into contact with.
this made me being the hospitality director for the monastery a perfect way to exploit my insecurities and desire for perfectionism because i was sure to be a good girl and get the job done.
i loved, and still do love and admire and interact with, the other workers that were with me at the monastery. it was one of the best AND worst times of my life— but the PEOPLE made it the best. as a 35 year old woman now i look back and see how incredibly toxic the environment was by the end of it. there were good intentions- and the people who were there with me did everything they thought they were supposed fo be doing at the time. just like i did. i repressed who i truly was as best as i could back then- but my people who knew me, truly knew me, knew who i was- and who i am. i wouldn’t take back my time there for anything. i would do a LOT of things differently if i could go back.
when we know better, we do better.
i’m glad to know better now.

Maggie Liz and others, thanks for sharing your experiences.

Ah yes, the Living Stone Monastery at the Mosaic Campus of Churches. My days there are good for a book. No one really knew what it was and I don't think they did either. Was it a drug rehab? A place for gay reperative therapy? A church? A multi-plant church? A "monastery"? A Guest House? A Homeless Shelter? There were all of these elements present there judging from various ministries and the 5-6 "residents" who lived there full time. It was trying to be all things to all people. The residents, folks meant to be in charge of the day to day upkeep and operations of the place in exchange for room and board were too busy figuring out how to run their own lives. I know it was run by several men who truly had a heart for Jesus but no clue about the "business" of such a venture. Once the 2 million dollar loan ran out, it went belly up and now belongs to All Generations Church who claim the entire property was given to them for free! How that worked out I do not know. Banks don't usually give foreclosed properties away.

But really, it's a sad story of the demise of a once vibrant and growing congragation called Hope Community Church who used to meet in an old grocery store on Warwick Blvd. The "Monastery" was to be their new, permanent home. The only problem was it didn't have a large worship space so when the church moved out of the grocery store the church was basically homeless, relegated to meeting in school cafeterias and for a awhile the auditorium at CNU. The move decimated the membership and the tithes that followed them. The church went broke remodeling a very old building and constructing a large metal building in the back to be used for worship. By the time it was all done, sadly everyone was gone.