Rainbows, the Trinity, and an Incomprehensible God 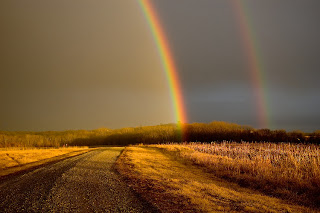 Last evening in Bible Study at JPBC, my mind got fixed on Ezekiel 1:28, the end of Ezekiel’s fantastic vision of God:
"Like the appearance of a rainbow in a cloud on a rainy day, so was the appearance of the brightness all around it. This was the appearance of the likeness of the glory of the Lord."
I recalled, Michael Haykin’s quotation (in Defence of the Truth, pp. 86-87) of Gregory of Nyssa who used the analogy of a rainbow to describe both the mystery of the Trinity and the nature of God (see Letter 38.5):
Yet receive what I say as at best a token and reflexion of the truth; not as the actual truth itself. For it is not possible that there should be complete correspondence between what is seen in the tokens and the objects in reference to which the use of tokens is adopted. Why then do I say that an analogy of the separate and the conjoined is found in objects perceptible to the senses? You have before now, in springtime, beheld the brightness of the bow in the cloud….
Now this brilliance is both continuous and divided. It is of many colours; it is of many forms; it is insensibly steeped in the variegated bright tints of its dye; imperceptibly abstracting from our vision the combination of many coloured things, with the result that no space, mixing or paring within itself the difference of colour, can be discerned either between blue and flame-coloured, or between flame-coloured and red, or between red and amber. For all the rays, seen at the same time, are far shining, and while they give no signs of their mutual combination, are incapable of being tested, so that it is impossible to discover the limits of the flame-coloured or of the emerald portion of the light, and at what point each originates before it appears as it does in glory. As then in the token we clearly distinguish the difference of the colours, and yet it is impossible for us to apprehend by our senses any interval between them; so in like manner conclude, I pray you, that you may reason concerning the divine dogmas; that the peculiar properties of the hypostases, like colours seen in the Iris, flash their brightness on each of the Persons Whom we believe to exist in the Holy Trinity; but that of the proper nature no difference can be conceived as existing between one and the other, the peculiar characteristics shining, in community of essence, upon each….
My argument thus teaches us, even by the aid of the visible creation, not to feel distressed at points of doctrine whenever we meet with questions difficult of solution, and when at the thought of accepting what is proposed to us, our brains begin to reel….
JTR
Posted by Jeffrey T. Riddle at 3:17 PM