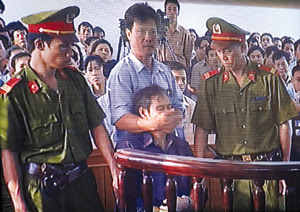 The past two issues of World Magazine reported the recent arrest and trial of Nguyen Van Dal. This 38 year-old Christian lawyer has been defending persecuted believers in Vietnamese courts for years. Nguyen, a member of the Evangelical Church of Vietnam, belongs to Advocates International, a global network of some 30,000 Christian lawyers who work to ensure religious freedom in their home nations. In 2004 and 2005 he gained international attention for his defense of the "Mennonite Six," a group of Vietnamese Mennonites who were arrested and tortured for their faith.
On March 6, 2007, however, Nguyen was himself arrested, along with a 28 year-old colleague, Le Thi Cong Nhan, for "propagandizing" against the Vietnamese republic. After a four-hour trial in Hanoi, the two received prison sentences of four and five years, respectively.

As we approach the Memorial Day weekend, we ought to pause for at least a moment and consider some of the benefits of religious freedom that we take for granted. No police informants are secretly infiltrating our church services. We do not have to ask the government’s permission to publish books or religious tracts. We do not face the risk of arrest or torture for assembling to worship. No censor must approve the messages that are preached.

The best marking of the Memorial Day weekend will likely not come in going to a soccer tournament, having a cookout, watching the big race, or visiting the newly opened pool. It is more likely to come in bowing our heads in prayer to thank God for the sacrifice of many of our fellow citizens who fell in battle—from the Revolutionary War, to the Civil War, to the great World Wars, to current conflicts in Afghanistan and Iraq—to secure for us and others the freedom to worship God according to the dictates of our conscience.

It would also be fitting to remember in prayer before the Father the members of the persecuted church, including men like Nguyen Van Dal. In the Parable of the Great Judgement in Matthew 25, Jesus has the sheep ask the King, "Or when did we see You sick or in prison, and come to you?" (v. 39). And the King answers: "Assuredly, I say to you inasmuch as you did it to the least of these My brethren, you did it to Me" (v. 40).