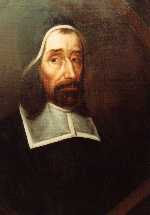 The Puritan Richard Baxter (1615-91) on the attempt to do education apart from a knowledge of God:
Nothing can be rightly known, if God be not known; nor is any study well managed, nor to any great purpose, if God is not studied. We know little of the creature, till we know it as it stands related to the Creator: single letters, and syllables uncomposed, are no better than nonsense. He who overlooketh him who is the 'Alpha and Omega, the beginning and the ending,' and seeth not him in all who is the All of all, doth see nothing at all. All creatures, as such, are broken syllables; they signify nothing as separated from God. Were they separated actually, they would cease to be, and the separation would be annhiliation; and when we separate them in our fancies, we make nothing of them to ourselves. It is one thing to know the creatures as Aristotle, and another thing to know them as a Christian. None but a Christian can read one line of his Physics so to understand it rightly. It is high and excellent study, and of greater use than many apprehend; but it is the smallest part of it that Aristotle can teach us.
Source, Richard Baxter, The Reformed Pastor (Banner of Truth [1656 original] 1974): 56-57.
JTR
Posted by Jeffrey T. Riddle at 10:41 AM

I just read that passage the other day and "dog-earred" it to remind me to come back and look at it more closely. What a great lesson for those of us with an intellectual bent.