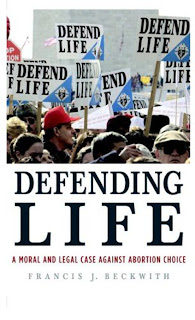 One breaking story over the weekend was that Francis Beckwith, a philosophy professor at Baylor (who gained his tenure at the moderate Baptist school with some controversy over his conservative, pro-life views) and current President of the Evangelical Theological Society (I'm a member), announced he had converted (or returned--he was apparently Catholic till his teen years) to the Roman Catholic Church. See his post "My Return to the Catholic Church" on the Right Reason blog and the numerous comments. Apologist James White responds here. A Baylor student from Beckwith's new church who is also a Catholic convert gives her take here.

Beckwith soonafter offered his resignation as ETS President, since the group is clearly evangelical, acknowledging in its minimal confessional standard: "The Bible alone, and the Bible in its entirety, is the Word of God written and is therefore inerrant in the autographs. God is a Trinity, Father, Son, and Holy Spirit, each an uncreated person, one in essence, equal in power and glory." There will, no doubt, be great discussion on this in days to come.

Mr. White's response is very well crafted and addresses what have been perpetual temptations posed by the Catholic Church for "intellectuals" (not necessarily Christian intellectuals). Where "Sola Scriptura" is not the battle cry of the church it is inevitable that the words and reflections of men will become revered. In other words, as James White argues, philosophy becomes eminent and revelation is diminished. It must be said that it is healthy for believers to consult the wisdom of our Christian elders, past and present, but the "Church Fathers" should never be the impetus for membership. My heart is greatly saddened to read the replies of men and women welcoming Mr. Beckwith back to "Rome." Rome is not the church. Rome is a principality and a spiritual perversion of prideful men. The church is universal and local. The appropriate welcome would be the open embrace of a bible believing local church. As for the church universal, it is not headquartered in Rome. I do not know Mr. Beckwith's work, but from what I have read of him today by respected Christian intellectuals, it must be questioned that he made this decision on pure spiritual grounds. In other words, I find it hard to believe that one can go from firm reformed theological convictions to professedly new convictions of the superiority of Catholic doctrine based purely on biblical grounds. He must also be swayed by "tradition" and the intellectual framework of the Roman Catholic Church. Why? Because a man of his intelligence would have always seen the glaring difference in theology between the two and the expanse of doctrine that is apparent has no honest bridge. The only bridge between Catholicism and evangelical reformed theology is the false bridge of "tradition" and romantic ideals.

I did not know that Rome had a monopoly on the spiritual perversion of prideful men. I believe there is a very long list of protestants that may find offense to you leaving them out. Without the bridge to Rome, you have no way of tracing your roots back to Christ. Is the Church 500 years old or 2,000? At what exact point in time did the Church in Rome become apostate? Which of the thousands of new denominations within the protestant world have the truth? Which of these "bible believing churches" do I go to? The one that washes feet? The one that dunks once or the one that dunks thrice? The pre, the post or the mid tribulationist? The pre or post milleniumist? Do they speak in tongues or not? Do they use musical instruments or not? Is the pastor in the front, rear or side of the altar? Is there even an altar? Do they have communion weekly, monthly or annually? Is it grape juice or wine? How many songs are they allowed? Do they have a cross or a dove behind the altar? Is it once saved or always saved, or is there the possibility that I might lose my salvation? I prefer the prior so as to no longer fear God. Could you point the way so that I also can have my words and reflections be revered.

John Hughes a reformed Evangelical that believes the Church is older than 500 years looking for a church.