How to have a worship service without God getting in the way: Reflections on the Virginia Tech Convocation 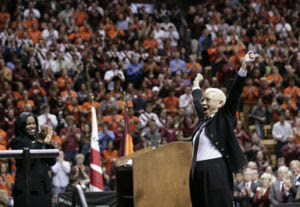 I watched part of the convocation at Virginia Tech from Tuesday (April 17) and found much of it to be very spiritually curious (see the video here).
How do you have a service of mourning with no clear commitment to belief in any particular religion or view of God? The painfully politically correct service was hard to watch. Here are some reflections.
Most disconcerting was the segment when four leaders from the religious community" were asked to speak. They were Dr. Riyad (sic?), a leader of "the local Muslim community," Julie Still (sic?), from the Living Buddhist group at Va Tech, Sue Kurtz (sic?), from the Hillel Society, and Bill King, the Lutheran campus minister.
The Muslim read from the Koran in Arabic; the Buddhist quoted the Dalai Lama; the Rabbi read from Ecclesiastes 3 in Hebrew; but the mainline Lutheran minister never mentioned the name of Jesus, though he did make an out of context quote from the gospel of John ("The Light shines in darkness but the darkness does not comprehend it"-John 1:5) without any reference to its location in the New Testament (contrast the pains taken by the imam to locate his Koran quotations) or its true Christological meaning.
The words from these leaders (except the Mulsim and the Rabbi, to some degree) were blandly humanistic. The Buddhist informed us that "the message of all religious teachings is the sacredness and value of human life." She also noted that ‘we are born into this world with an inherent good nature" and "we must restore our faith in humanity."
The mainline Lutheran told the audience that one of their purposes for coming together was to "drink deeply from religious streams." Note the plural. The "all is one" spiritual philosophy was the only view on display. He also affirmed what he called "the sovereignty of life over death" but said nothing of the sovereignty of the God of the Bible.
On one hand, one might say that the representation of various religions was appropriate (the victims did include those from diverse religious backgrounds). On the other hand, it seems odd that no evangelical Christian Minister or Pastors of local Christian congregations (the Lutheran is a campus minister) were on stage (perhaps some were invited and declined to be part of the "interfaith" experience). Also, the choice of representatives supposedly from the "local" religious community was so obviously and cloyingly politically correct. Once wonders, in reality, how many practicing Buddhist are really in Blacksburg or Montgomery County, Virginia? Check out the religious stats for Virginia, Roanoke, and Montgomery County. The largest group (evangelical Protestants) and even Catholics were not included at the Convocation podium.
The few overt Christian aspects of the convocation included the instrumental version of "Amazing Grace" and the unison recitation of the Lord’s Prayer.
The Convocation ended with a poem by Va Tech Professor, Nikki Giovanni. This was one of the most surreal aspects of this convocation. First, this "Black Panther" poetess came to the podium dressed as a man with a dark androgynous suit, white shirt and black tie. Her poem, "We are Virginia Tech" was presented in the oratorical style of a black preacher. She shouted, "We did nothing to deserve it" (contrast Jesus’ reaction to unexpected evil in Luke 13:1-5 and his challenge: "But unless you repent you too shall perish."). She encouraged, "We are better than we think." And she compared the human losses at Va Tech with a baby elephant losing its family to ivory poachers! Wasn’t the whole point of the convocation to decry the devaluing of human life?
When no preachers of the gospel are allowed to speak, I guess a woman poet dressed up as a man is the best a secular world can offer.
The convocation also reflected the secular university’s undying confidence in "counseling." A senior administrator encouraged students to go where they could get the best hugs. When you do not have the body of Christ, I suppose counseling and hugs are the best you can do.
The convocation was a fascinating look into what human-centered spiritual life looks like without all the encumbrance and strictures of the God of the Bible. As Jeremiah lamented in his day, "They have healed the hurt of My people slightly, saying ‘Peace, peace!’ when there is no peace." How do we find real peace? See Romans 5:1: "Therefore, having been justified by faith, we have peace with God through our Lord Jesus Christ."
JTR

Well said!
Given your passion on all this, I’m here asking if you can reveal to me where the call to recitation of the Lord’s Prayer came from during the convocation. The video on the Va’Tech website [http://www.hokiesports.com/convocation.html] doesn’t reveal where, except that it was NOT from the main speakers stage. Neither can I find any “order of services” or “program” in my investigating the political correctness of it all. I’ll go public here with my email address donny4444@aol.com if anyone reading this can help me learn.

I didn't see the service so I can't comment directly, but I think the major reason evangelicals (and Catholics) tend not to be welcome to speak at events like that is the fear that they will (gasp!)evangelize. The good news of salvation in Jesus comes, implicitly or explicitly, with the bad news that any of those 33 people (perhaps even the heroic Holocaust survivor who gave his life for his students!) who had not acepted Jesus are forever lost. That's a hard thing for even a Christian to contemplate, let alone a non-Christian.

I can only imagine the outrage if such a statement were made in a public ceremony whose purpose is to comfort a grieving community.
The evangelical would be seen first as hateful, second as mercenary, trying to take advantage of a tragedy to win converts.

Putting aside the truth of our beliefs for a moment, the question is, is telling "the whole truth" at such a time appropriate? Is it in poor taste? Would it hurt the cause for Christ in the long run? And is it better for a devout Evangelical to bow out of participating rather than dilute the message?

It makes me wonder how evangelicals who are Army or hospital chaplains and must offer comfort to people of a variety of faiths, usually under tragic circumstances, cope with such questions.

Good article on the worst eulogy I've ever seen in my life. I don't imagine that very many of those families feel as if they are 'prevailing' at that moment, as Nikki told us they were.