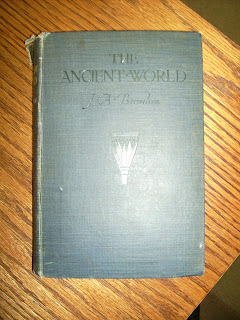 I recently read J. A. Brendon’s The Ancient World (Glascow, Scotland: Blackie and Son, 1925). This popular-level work was written to teach British young people the basics of ancient history in the 1920s. I was struck by the presumption of and outright claim toward Christian and Western cultural superiority. Here are a few quotes:

1. On the ancient profundity of Mesopotamia in contrast to its contemporary poor agricultural condition:

"If the Tigris-Euphrates basin—Mesopotamia, "the land between the two rivers"—is now a desolate and barren country, that is because of the indolence of the Turks and Arabs, who have held it since the eleventh century of our era" (p. 17).
2. On the intellectual acumen of the ancient Greeks:
"Intellectually, however, the Greeks were supreme among the peoples of the ancient world, and to them we owe all, with the exception of Christianity, that is essential to our social and political life" (p. 117).
3. On the contrast between Greeks (West) and Turks (East):
"The Turks are a typical oriental people; and we have seen in our own times, wherever the Turk has ruled a blight has fallen on the land" (p. 117).
4. On the significance of the life of Jesus Christ in world history:
"In Judea, during the reign of Herod, occurred an event which has influenced human development more profoundly than any other event, before or since, in the history of mankind. That event was the birth of Jesus Christ" (p. 162).
Brendon’s The Ancient World is not a "Christian" text, but it flatly acknowledges the impact of Christianity. It would, no doubt, be dismissed today as imperial, colonial propaganda, but does it speak accurately about the impact of Christ and the difference he makes in the cultures he influences?
JTR
Posted by Jeffrey T. Riddle at 10:00 AM