The Old Baptists, Revivals, and "the axe of discipline" 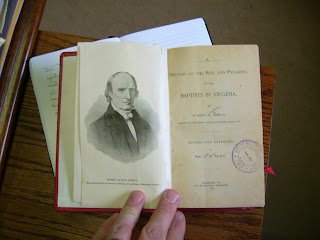 I’ve been reading through Robert Baylor Semple’s History of the Rise and Progress of the Baptists in Virginia (originally published in 1810; extended and revised by G. W. Beale in 1894).
I was struck by Semple’s description of what would happen in the aftermath of a season of spiritual revival or renewal among the early Baptists.
For example, of the October 13, 1792 meeting of the Dover Association at the Bruington meeting-house, Semple writes:
"By then it appeared that in the Dover District the harvest was past and the summer ended. Coldness and languor were generally complained of. The great revival had now subsided and the axe of discipline was laid at the root of the tree. Many barren and fruitless trees were already cut down. In many churches, the number excluded surpassed the number received. The Association, however, was full. Great crowds attended the preaching, and it was doubtless a happy season to God’s children" (p. 124).
In describing the history of the Grafton Church in York County, Semple explains:
"They had in the year 1805, under the united labors of Elders Gayle and Wood, one of the most heavenly revivals; not less than about 330 or 340 were baptized. After the revival they had a winnowing season. Many that seemed to be somewhat proved to be nothing. Yet there is still a large and respectable church" (p. 151).
The assumption seems to be that after a season of revival there would always be a season of "winnowing" or testing to see if the professions of faith were genuine. If there was no fruit, then "the axe of discipline was laid at the root of the tree." What can we learn about revivals and integrity from the old Baptists?
JTR
Posted by Jeffrey T. Riddle at 2:48 PM

Semple's book is prominent on my shelf. Excellent quote in considering the fruit of revival.