Personal Reflections: A Dozen or So Interesting Reads in 2022 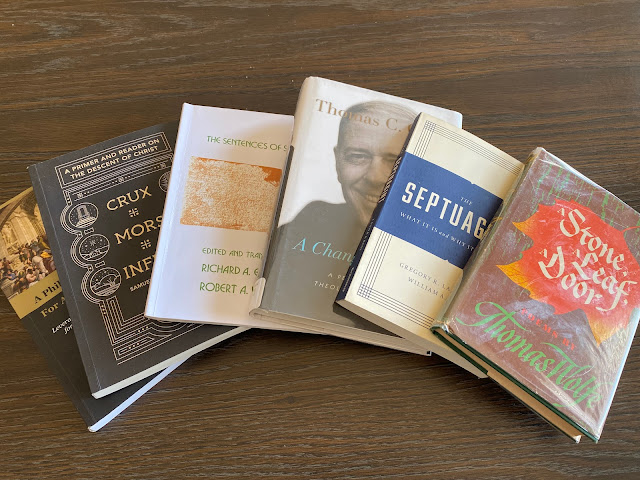 I generally like to do some reflection at the end of one year and the beginning of another, including thinking about the reading I’ve done. I used to make it my goal to complete one book each week (so c. 52 books a year). The last few years have not allowed me as much time for sustained reading as I would like. I have the tendency to get started in a book and then leave it when another catches my eye. I’m also more prone to just read a chapter or two from a book that addresses a topic of interest or research. New books seem always to be piling up. I’ve kept a reading journal for many years. I also try to write book reviews (some of which I post to my blog, submit to journals for publication, or just keep for myself). I find that this discipline has helped me remember the contents of my reading better and the reviews/notes also serve as a resource for my preaching, teaching, and writing. Though I have a specific interest in text and translation of the Bible, I am overall a generalist (as most ministers are) and enjoy reading in various areas of theology and church history and in other genres too.

This was the Christianity Today book of the year in 2021. Though pitched at a popular level, it still required careful reading. It helped me think through the doctrine of the Trinity and to be more careful when speaking and writing about God.

Though the Van Kleecks defend the traditional text (“Standard Sacred Text”) of the Bible from a perspective not exactly the same as my own, I found plenty that was helpful in their books on epistemology, preservation, and Bibliology.

My family started reading this book aloud together after supper in the fall of 2021, before we made a trip to visit Metropolitan Tabernacle, and finished it up early in 2022. A lively survey of Spurgeon’s life, sometimes bordering on hagiography, that provoked lots of helpful family discussion on everything from historiography to smoking cigars.

This slim diglot (Greek and English) of 451 pithy maxims, opens a window into an early effort to blend Christianity with Stoicism, and still offers some sage counsel. A few examples:

Sentence 171b: When among believers listen rather than speak.

Sentence 262: If you want to live happily, do not do too many things; for if you do more than you should, you will do it poorly.

Oden spent the first half of his life as a modern theological liberal and the second half trying to retrieve the wisdom of the ancient church (including his magnum opus, editing the Ancient Christian Commentary on Scripture series).

A few other memoirs I read last year: Frank Schaeffer, Why I Am an Atheist Who Believes in God: How to Give Love, Create Beauty, and Find Peace (Schaeffer, 2014); Luke Timothy Johnson, The Mind in Another Place: My Life as a Scholar (Eerdmans, 2022); Charles Marsh, Evangelical Anxiety: A Memoir (HarperOne, 2022).

The cover of this slim hardback caught my eye when browsing through one of my favorite used bookstores in Charlottesville. Wonderful collection of poems from a writer with whom I share Western North Carolina roots.

Seven: Samuel D. Renihan, Crux, Mors, Inferi: A Primer and Reader on the Descent of Christ (2021).

I’ve been thinking of “the descent” the last couple years, having read the takes of Daniel Hyde, Matthew Emmerson, and Hilarion Alfeyev. Renihan adds more fuel to the fire, but I’m not quite settled on it yet.

A respected Roman Catholic scholar offers a survey of Trent and its response to the Protestant Reformation. What stood out to me was the astounding corruption of the Roman leadership, and this made me admire only more the courage and tenacity of the Reformers.

We hear quite a bit about former Protestants and Evangelicals who convert to Rome or Constantinople, but this brief work describes a pilgrimage in the opposite direction.

Ten: Brent Nongbri, Before Religion: A History of a Modern Concept (Yale, 2013).

I’ve appreciated Nongbri’s writings on the text of the Bible and his challenging the dating of some manuscripts. This made me want to read some of his other writings, including this one on the comparative study of religion. He makes the argument that the very use and definition of the word “religion” has been influenced by modern Protestantism and inappropriately applied both to “world religions” and “ancient religions.”

Eleven: Gregory R. Lanier and William A. Ross, The Septuagint: What It Is and Why It Matters (Crossway, 2021).

This book provides some good information and makes some good points, like the term “Septuagint” is fuzzy, and it’s better simply to talk about the “Greek Old Testament.” Negative: It assumes the LXX (aka Greek OT) should be used to “correct” the Hebrew. Positive: Good discussion of how to understand quotations of the LXX (Greek OT) in the NT.

Twelve: Frank Furedi, Why Borders Matter: Why Humanity Must Relearn the Art of Drawing Boundaries (Routledge, 2021).

This isn’t a book about immigration but about borders or boundaries as a sociological concept. Some interesting applications for religion and even for Bibliology.