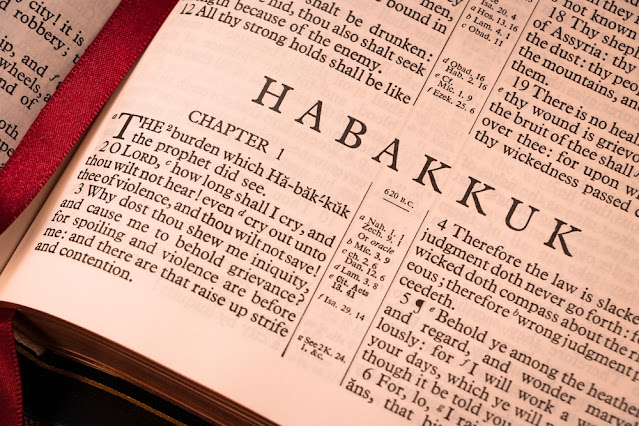 We began last Sunday afternoon a brief series through the book of Habakkuk, one of the so-called “Minor Prophets.”

The title in Habakkuk 1:1 provides our basic orientation to this little book: “The burden which Habakkuk the prophet did see” (cf. Nahum 1:1).

Who was the prophet Habakkuk? We have almost no biographical information about this prophet, other than his name, within this book. The name Habakkuk appears nowhere else in the Scriptures.

He must have been a man well known and respected, however, in his day. He does not need to explain who he is. He must also have been a man of humility, who did not feel compelled to call attention to himself. He is like John the Baptist, pointing away from himself and toward the Lord (John 3:30).

What does the name Habakkuk mean?  Even the meaning of his name is unclear. Some have suggested it comes from the name of a plant. Others suggest it comes from a Hebrew verb which means “to embrace” or “to ardently embrace.” This word appears in 2 Kings 4:16 when Elisha tells the Shunammite woman, “thou shalt embrace a son.” Some have suggested that the spiritual significance of the name was that Habakkuk would be one who would cling to God in the midst of troubles and calamity. To turn that around, maybe it referred to the fact that the prophet felt as though the living God had embraced him, as the Shunammite did her son.

What is the historical setting for the book? No specific names of the kings of Israel or Judah are mentioned for us to be able to pinpoint the date, but in 1:6 he prophesied of the LORD raising up the Chaldeans. From this most have construed that Habakkuk was writing in the last days of Judah before it fell to the Babylonians. This means Habakkuk would have been a contemporary of Jeremiah. Some have suggested that was ministering during the days of Josiah, the last great hope for Judah, and had seen the death of Josiah in battle and the undoing of all his reforms under his successor Jehoiakim. So, he was living in the last days of his nation. He saw the doom that was ahead and was naturally filled with dread and questions about the disturbing things that were about to come.

What is the structure of the book? The first two chapters are something like a lament and a theological reflection on the coming collapse of the nation. The last chapter is a prayer of the prophet (see 3:1).

How was Habakkuk used in the New Testament? This book was known, read, and used by the apostles. The most often cited passage from this book in the NT is Habakkuk 2:4 which ends, “but the just shall live by his faith.” The apostle Paul appealed three times to this verse in his writings (Rom 1:17; Gal 3:11; Hebrews 10:38).

What is Habakkuk about? In the opening chapter, Habakkuk offers a lament, “O LORD, how long shall I cry, and thou wilt not hear!” (1:2a; cf. Psalm 13:1-2). He then proceeds, however, to acknowledge the greatness of God: “Art not thou from everlasting, O LORD my God, mine Holy One?” (1:12a). Thus, he notes the eternality of God, who is from everlasting to everlasting, as well as his holiness. Perhaps these two statements sum up the book’s theme. In the midst of national doom and personal distress, the prophet discovers the greatness of his God.