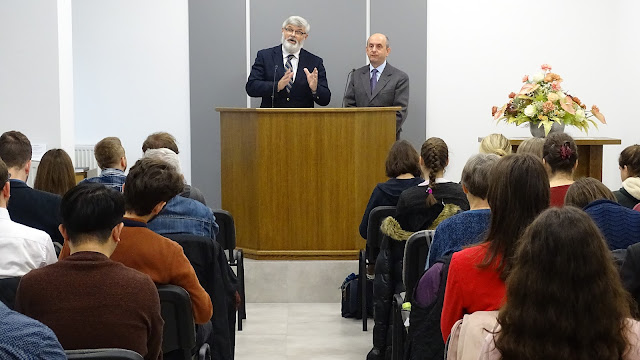 At the end of last year I noted a dozen memorable events of 2021. Looking back on 2022 I thought I’d do the same. Here are ten select highlights (in general chronology order), along with a few links, from 2022:

1.     I got to see my youngest two sons start on the Grace Christian School baseball team and win a second consecutive VACA state championship (this time over Smith Mt Lake CS) held on the campus at Liberty University on May 14. My son Isaiah won the tournament MVP for the second consecutive year. I also got to see Isaiah graduate from Grace in May and begin college in August.

2.     I enjoyed a week of vacation with my family at Topsail Island, North Carolina, June 27—July 2.

3.     I had the privilege of giving three lectures on “Received Text Apologetics” at the 2022 Kept Pure in All Ages Conference at the Five Solas OPC in Reedsburg, Wisconsin on July 22-23.

4.     The book Why I Preach from the Received Text, which I co-edited with Christian McShaffrey and to which I contributed a chapter, was released by The Greater Christian Heritage in July 2022 and became the publisher’s all-time best-seller. I also had several articles published throughout the year including “A Defence of the Traditional Text of Scripture,” in Sword & Trowel (Metropolitan Tabernacle, London) (2022 No. 1); “One Thing is Needful: An Exposition of Luke 10:38-42” in Reformation Today (No. 305, July-September, 2022); and “In Defense of the Traditional Text of Philippians 4:13” in Bible League Quarterly (July-September, 2022). In addition, the Ukrainian edition of my book The Doctrines of Grace: An Introduction to the Five Points of Calvinism was also published in December.

5.     I baptized my youngest son Joseph, along with several others, on Sunday, August 14 at the Woolfolk’s pond in Louisa. I have now had the privilege of baptizing all five of my children upon their profession of faith.

6.     My oldest daughter Hannah became the first of my children to be engaged to be married [to a fine young man from Texas] (the wedding will be in early 2023).

7.     I gave a challenge-to-the-candidate ordination message in the service to install my friend Andrew McCaskill to the eldership on August 28, at Emmanuel RBC, Verona, Virginia.

8.     I had the privilege of speaking on “The Case for the Received Text” at the Text and Translation Conference sponsored by the Trinitarian Bible Society in their offices in  London on September 15. I then attended the 191st Annual General Meeting of the Trinitarian Bible Society, held at the Metropolitan Tabernacle Church in London on September 17. I also preached at Westminster Baptist Church in London in the morning and evening services on Sunday, September 18 (the day before the Queen’s funeral).

9.     I gave the “Orientation to the 2022 Keach Conference” at the 21st annual meeting of this theology conference, held on September 24 at Grace Baptist Chapel in Hampton, Virginia.

10.I gave three lectures on “The Reformation and the Text of the Bible” in a conference sponsored by the Soli Deo Gloria Baptist Church in Budapest, Hungary on October 29 and then preached the morning and evening services there on October 30. I enjoyed the hospitality of Pastor Miklos Chiciudean (and his family). Miklos had been one of my students in the Hungarian Baptist Seminary thirty years ago.

11. My youngest son Joseph started for Grace when they won their first ever VACA state championship in soccer on October 29 in Harrisonburg over Blue Ridge CS (but I was in Hungary and had to miss seeing it in person!).

12. I passed the 30th anniversary of my ordination to pastoral ministry, which took place at Beulah Baptist Church in Lyells, Virginia on November 15, 1992.