R. L. Vaughan's book review of Why I Preach From The Received Text 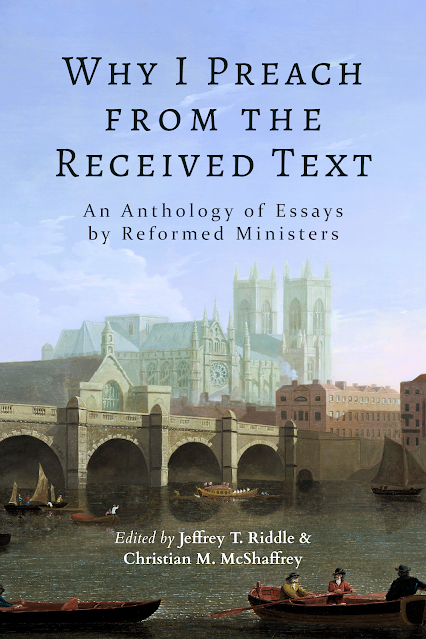 Note: Good to see a balanced and thoughtful review of our book that grasps its true purpose, after several online youtubers (e.g., Ward, Everhard) have distorted and misrepresented it. This is also the first review that addresses the appendix and select bibliography. R. L. Vaughan is pastor of Old Prospect Baptist Church in Mt. Enterprise, Texas.

Why I Preach from the Received Text expands and extends the available resources confronting the dominant modern text criticism and its associated texts and translations. Confessional Bibliology leaders/pastors Christian McShaffrey and Jeffrey Riddle edit the work, joined by a supporting cast of 22 Reformed ministers and 1 deacon. The editors build this work with a simple design around a simple question to the contributors – “Why do you preach from the Received Text?” The answers furnish the chapters of the book. The answers have both simple significance and complex contents.

Why I Preach from the Received Text is a valuable contribution to the field of bibliology. The editors launch the book with an “Editorial Introduction” (pp. 13-19), which demonstrates why this book matters. “Modern academic textual criticism rejects divine preservation, and therefore proceeds to pursue reconstruction of the text based on human reasoning” (p. 15). “The primary purpose of this book is a defense of the traditional original Hebrew and Greek text of the Bible” (p. 17). The goal of testifying, teaching, and encouraging is soaked in prayer, “May the Lord use this book as an instrument to stimulate, revive, confirm, and defend intelligent and effective usage of the traditional text of the Word of God” (p. 19).

The book’s subtitle explains that is it a collection of writings by various authors. The contributors are “men who were gladly laboring in the trenches of local church ministry” (p. 16). These authors exhibit both unity and diversity – unity on the text of the Bible and Reformed theology, with diversity of denominational affiliation and geographical location. Twenty-four of the chapter authors are preachers. One essay displays a layman’s perspective – a Baptist deacon explains why he wants to be preached to from the Received Text! The choice of introducing the essays in alphabetical order suggests that all these essays are equally important. The reader can fruitfully follow the established order, or may read them in any order. The essays not only complement each other, but also are capable of standing alone. The book’s style (conversational, with short chapters) and little larger than usual print makes it easy to read.

Following these essays, the editors return with a practical “Appendix” which offers “Steps Toward Change.” The book testifies and teaches, but also propels and persuades. The approach of “Steps Toward Change” is not academic, but pastoral, geared to local church ministry.

An “Annotated Bibliography” on pages 261-276 rounds out the work. Rather than give a bare list, the editors chose brief descriptions and evaluations of each work – providing not only possible resources, but also careful guidance in selecting them. The bibliography is divided into 13 sections, beginning with “Books, Pamphlets, and Tracts” and concluding with “Websites that Defend the Traditional Text.”

Why I Preach from the Received Text balances testimony and theology. Some authors “from a child” knew the traditional text, and some “fetched a compass” to get there. The authors are English speakers (residing in Australia, Canada, the United Kingdom, and the United States). Consequently, they preach from the Received Text (usually) via the Authorized Version, or (sometimes) the New King James Version. Though expressing consistent support for the Authorized or King James Bible, they are not King James Version Onlyists. They arrive at their common positions from their confession that original language copies of the Scripture have been “kept pure in all ages.” They present the positive and negative – what is right with the received text and what is wrong with the critical text – through testimonial, theological, and historical approaches. The authors believe they have “scripture, theology, reason, and history on our side” (p. 259).

The angles of approach allow each individual author to focus on the traditional text in his own way. For example, Pooyan Mehrshahi notes the value of a definitive text, “The TR-based historic translations [in various languages] give the church a standard and unifying text of the Holy Scriptures” (p. 171). Christopher Sheffield relates his journey, “I did not set out to disprove the claims of the modern Critical Text, only to understand them; but as time went on, I became increasingly convinced that the modern Critical Text and the philosophy which undergirded it, was an affront to the honor of God, the glory of Christ, and the good of the Church” (p. 206).

Due to the number of contributors, the essays are short. Some readers may find themselves wishing for more. Nevertheless, the brevity and autonomy of the chapters has an intrinsic sufficiency, and well suits the reader with a busy schedule. Due to the testimonial nature of the essays, there is an inevitable amount of repetition. However, that can edify rather than annoy the reader. Good variety with repetition, unified on a central theme, is not inherently a bad thing.

The synopsis of the book is succinctly summed up in Scott Meadows’s chapter title “Why [do I preach from the Received Text (TR)]? It’s the Word of God” (p. 160). The theological position promoted by the contributors to this book sets their view above and apart from supporters of the modern Critical Text and Bibles translated from it. For the latter, there must always be some question whether all of it is the word of God. The contributors to this book do not settle for a gospel that is mostly good news, spiritual food that is mostly good food, or a spiritual sword that is mostly sharp. From what do they preach? The Received Text. It’s the word of God!

Why I Preach from the Received Text is solid, accessible, and practical. It emanates from a biblical theology of the providential preservation of God’s inspired writings. It provides personal, thoughtful, and reasoned support for the traditional texts. It challenges, with personal, thoughtful, and reasoned objections, the modern critical texts. “To those who believe that God has providentially preserved his Word, the question of the veracity and tenacity of Scripture has been asked and answered. God has spoken” (p. 252). Those who favor the traditional texts of the Bible will find support, strength, and encouragement. Those who deny the traditional texts will be surprised, confronted, and challenged.

Labels: book review, Why I Preach From The Received Text

I haven't read the book yet but do intend on reading it soon. I haven't completely reached the point where the authors are presently. The interviews have been encouraging and helpful. I highly respect everyone who has been interviewed so far in their desire to convey what they know and how they want God to be honored in all of this. It is the desire of all believers to honor God. Sometimes we don't all agree on how to do it. Church History testifies to this. This review I think is fair. It isn't helpful when our own views aren't represented well.