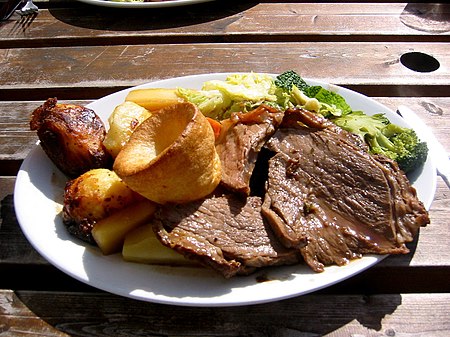 I watched a video the other day where someone mentioned the British tradition of a "Sunday roast." I'd never heard of this tradition. I then looked up this article on wikipedia:

"A Sunday roast is a traditional British meal that is typically served on Sunday, consisting of roasted meat, roast potatoes and accompaniments such as Yorkshire pudding, stuffing, gravy, and condiments such as apple sauce, mint sauce, or redcurrant jelly."

"A wide range of vegetables can be served as part of a roast dinner, such as broccoli, Brussels sprouts, carrots, cauliflower, parsnips, or peas ... alongside the meat and potatoes. Mashed potatoes are also a frequent accompaniment."
Adding:
"The Sunday roast's prominence in British culture is such that in a UK poll in 2012 it was ranked second in a list of things people love about Britain. Other names for this meal include Sunday lunch, Sunday dinner, roast dinner, and full roast."
Growing up in the South, it was the norm for us to have a big "Sunday dinner" (the largest meal of the week), right after Sunday morning church that typically included roast, potatoes, carrots and various vegetables (but not Yorkshire pudding!).
With the family name Riddle (Rye-dale) and other family names like Webb and Honeycutt in my mix it dawned on me that maybe what I thought was a Southern tradition actually had its roots in England.
JTR
Posted by Jeffrey T. Riddle at 11:49 AM