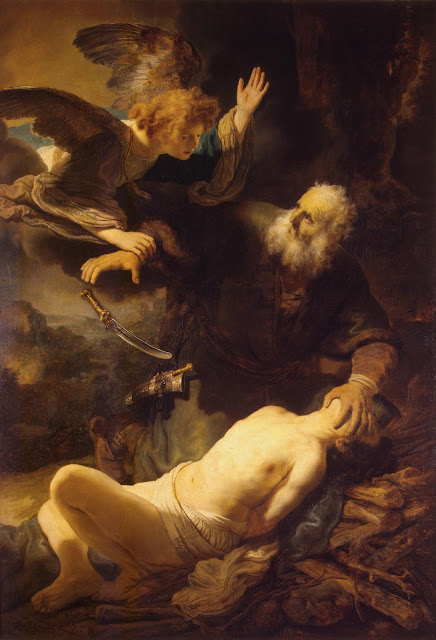 Romans 4:2 For if Abraham were justified by works, he hath whereof to glory; but not before God. 3 For what saith the scripture? Abraham believed God, and it was counted unto him for righteousness.

James 2:21 Was not Abraham our father justified by works, when he offered Isaac his son upon the altar?

The question posed by James in James 2:21 is provocative and easily misunderstood. What does James mean when he says that Abraham was justified by works? Does this not contradict Paul? Is the Scripture broken?

Paul had a lot to say about Abraham, the first patriarch (cf. Gen 12:1-3). Paul claimed Abraham was the spiritual father of all believers, whether Jew or Greek (see Gal 3:26-29). He also saw Abraham as the model of those who were saved by God’s grace and justified by faith, citing Genesis 15:6: “Abraham believed God and it was counted unto him for righteousness” (Rom 4:3). Abraham was justified by faith, not by works (cf. Eph 2:8-9).

How then can what Paul says is Romans 4:2 possibly be made to square with James 2:21: “Was not Abraham our father justified by works….?”

Are the Scriptures broken here? Are they in a hopeless state of self-contradiction?

First, the same word in the Bible can have more than one meaning.

We’ve seen that already with respect to the word “believe.” This verb can refer to “saving faith” as in the Ethiopian’s confession in Acts 8:37: “I believe that Jesus Christ is the Son of God.” But it can also mean to have an intellectual understanding apart from saving faith, as in James 2:19 when James says the devils also believe in God and tremble.

When Paul says that a man is justified by faith and not by works, he is referring to the fact that man is made right (just) in the sight of God, by grace, through the means of faith.

When James says a man is justified by works, however he is not talking about salvation, but he is talking about how a saved man acts in a righteous (just) manner through the doing of good works.

Notice the Old Testament reference used in James 2:21 to illustrate how Abraham was “justified” by works. It was when he offered up his son Isaac upon the altar in Genesis 22, one of the greatest narratives in all the Scriptures.

Here is the key point for our purposes: In Genesis 22 Abraham was already a believer. Genesis 15:6 (Abraham’s saving faith) comes before Genesis 22 (his good work of obedience).

Genesis 22 is not an account of Abraham’s salvation but his sanctification. It does not tell us how he was saved. It tells us how he lived out his salvation. It does not tell us about the root of his faith, but about the fruit of his faith. Abraham was justified (made righteous) by faith (Gen 15:6, Paul’s point), and he was justified (proven to be righteous) by works (Gen 22, James’s point).

Again, Paul and James are not in conflict. As Spurgeon responded when asked to reconcile divine sovereignty and human responsibility, “There is no need to reconcile friends.”

Thank you for posting this, it was very helpful!