Machen on Pedagogy and Faith 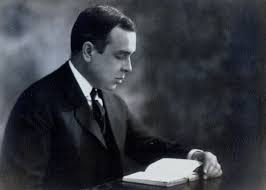 Yesterday morning I started preaching my way through Hebrews 11, the great faith chapter.  As part of my preaching preparation for this topic, I also started reading J. Gresham Machen’s What is Faith? (1925; Eerdmans reprint 1962).

In the opening chapter, the Reformed defender of orthodoxy in the face of modernism, who had taught at Princeton and later withdrew at the formation of Westminster, attacks the modern shift in educational philosophy, from facts to experience.  Though written in the 1920s it has an uncanny contemporary ring to it, particularly for the ears of any who have done any college level teaching.

Here are some of Machen’s thoughts:

…The old fashioned notion of reading a book or hearing a lecture and simply storing up in the mind what the book or lecture contains—this is regarded as entirely out of date.  A year or so ago I heard a noted educator give some advice to a company of college professors.—advice which was typical of the present tendency in education.  It is a great mistake he said in effect, to suppose that a college professor ought to teach; on the contrary he ought simply to give the students an opportunity to learn.

This pedagogic theory of following the line of least resistance in education and avoiding all drudgery and all hard work has been having its natural result; it has joined forces with the natural indolence of youth to produce in present-day education a very lamentable decline….

The undergraduate student of the present day is being told that he need not take notes on what he hears in class, that the exercises of memory is a rather childish and mechanical thing, and that what he is really in college to do is to think for himself and to unify his world.  He usually makes a poor business of unifying his world.  And the reason is clear.  He does not succeed in unifying his world for the simple reason that he has no world to unify.  He has not acquired a knowledge of a sufficient number of facts in order even to learn the method of putting facts together.  He is being told to practice the business of mental digestion:  but the trouble is that he has no food to digest.  The modern student, contrary to what is often said, is really being starved for want of facts (pp. 15-17).

Interestingly, just after I read this I attended an orientation meeting at a large university which my daughter will be attending this fall in which the president told the parents that the administration did not want our children simply sitting in the classroom listening to lectures and taking notes.  I’m thinking, however, that there might not be anything wrong with that.  Some knowledge simply needs to be transferred from those who know it to those who don’t.  And there’s not much for the student to work with till he has mastered some basic facts.

Machen’s discussion of pedagogy, of course, had a spiritual end.  His point was that the modern shift in education also reflected a modern shift in Christian doctrine and practice.  Modern liberals did not want to bogged down with doctrinal precision in defining who Jesus is, particularly given that they were dismantling the traditional and confessional view of Jesus.  They preferred the mystical approach.  Just trust Jesus, but don’t bother with controversial attempts to define who he is.  So Machen observes:

The preacher says:  “Believe on the Lord Jesus Christ, and thou shalt be saved.” But how can a man possibly act on that suggestion, unless he knows what it is to believe (p. 43).

It is perfectly true that faith in a person is more than acceptance of a creed, but the Bible is quite right in holding that it always involved acceptance of a creed.  Confidence in a person is more than intellectual assent to a series of propositions about the person, but it always involves those propositions, and becomes impossible the moment they are denied (p. 48).