The Vision (8/23/12): Thoughts on the Benediction as an Element in Worship 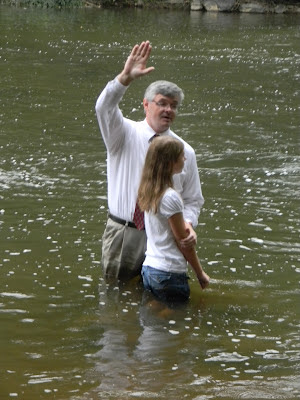 In the kind Providence of God the rain held off and we were able to observe the ordinance of baptism in the Rivanna River last Sunday morning (8/19/12).  Image:  A CRBC youth about to be plunged into the watery grave of baptism upon her profession that "Jesus is Lord."


Over lunch last Sunday, those sitting at my table began discussing the benediction (blessing or “good word”) that typically concludes our worship services at CRBC.  After the closing prayer I typically pronounce a Scriptural benediction upon the congregation.  In the AM service, this is usually the so-called Aaronic blessing of Number 6:24-26 (“The LORD bless thee and keep thee….”), and in the PM service Paul’s trinitarian blessing from 2 Corinthians 13:14 (“The grace of the Lord Jesus Christ….”).  I sometimes transition from the closing prayer to the benediction by saying (something like), “And now we receive this blessing from God’s own Word…..”  Of late, I have sometimes also said to the congregation, “And now you may lift your eyes to receive the benediction….”


The questions discussed at our table were along these lines:  Is the benediction a prayer?  Where do we find warrant for the benediction in Scripture?  Is it OK to receive the benediction with head bowed and eyes closed, continuing the posture of the closing prayer?


Let me try to address these questions in turn:


Is the benediction a prayer?  Though the benediction ends with an “Amen” and thus fittingly concludes both the closing prayer and the worship service as a whole, it is not, in fact, a prayer.  Prayers are human words spoken to God.  The benediction, on the other hand, is what we might describe as God’s response to our prayer and to our worship.  We are not listening to the minister praying on our behalf but to God speaking directly to us.  This is why the benediction comes from Scripture.  It is God’s Word.  We sometimes like to say that we give to God the first and last word in our worship.  The first word is the opening Psalm that is read.  The last word is the Scriptural benediction.  In the benediction, the minister, a man who has been set apart as an officer of Christ’s church, acts as God’s ambassador and announces his blessing.  The blessing does not originate with the minister.  Neither I nor any other minister can convey a blessing that will have any lasting value.  We are mere weak men.  We are only the messengers of God’s blessing.  We stand on Christ’s behalf to announce what he has declared in his Word.  Is it presumptuous to think that God would bless us?  No.  This is one of the precious promises of God’s Word.  He loves and loves to bless his people.


Where do we find warrant for the benediction in Scripture?   As already noted, Numbers 6:24-27 provides an Old Testament example of a benediction.  It is sometimes called the Aaronic blessing, because it was given to Aaron and his priestly sons to be pronounced upon Israel:  “And the LORD spake unto Moses saying, Speak unto Aaron and unto his sons, saying, On this wise ye shall bless the children of Israel, saying unto them” (Numbers 6:22-23). The setting for this benediction would have been the public worship of the Old Testament saints.  In the New Testament, there are a number of apostolic blessings, like the one Paul pronounced upon the Corinthians in 2 Corinthians 13:14.  We often find these at the close of the New Testament letters from Paul and Peter which would have been read aloud in the Lord’s Day gatherings of the church (cf. Colossians 4:16).  A common thread here is that the blessing was announced by church officers (OT priests and NT apostles).  The offices of priest and apostle have passed away, but the “ordinary” office of elder remains.  It seems fitting that the minister (teaching elder) as the officer given the task of leading worship should be the one to announce the benediction.  The Puritan Westminster Directory of Worship, which attempted to lay out a Scriptural pattern of worship, suggests:  “let the minister dismiss the congregation with a solemn blessing.”


Is it OK to receive the benediction with head bowed and eyes closed, continuing the posture of the closing prayer?  The short answer to that question is, “Yes.”  My experience is that many with typical “Baptist” backgrounds where worship is often concluded with a closing prayer (usually after an “invitation” or “altar call” which our church does not include as an element in worship), feel more comfortable maintaining a prayer posture.  Others, for example those in our midst coming from a Presbyterian background, are more familiar with the benediction as a distinct element in worship and are familiar with opening their eyes both to see and hear the benediction.  My hope is that no one would feel conspicuous or uncomfortable during the benediction.  Whether you simply hear God’s words spoken to you, or hear them and see the minister as the Lord’s servant announcing them, my hope is that you will receive a blessing from the triune God of Scripture.


“Brethren, the grace of our Lord Jesus Christ be with your spirit. Amen.” (Galatians 6:18).

great post on the benediction. My personal preference is to receive the benediction with eyes upon the minister as he pronounces the blessings of God upon those that are in Christ. It helps my faith to hear it proclaimed to me again, the favor of our God from His bounties of grace. It reminds me that when we worship, we are receiving far more than we can offer.

BTW, thanks for the Baptism pic. What a blessing to see that the Lord is still adding to His church through the gospel ministry.