A Biographical Note on Edward Gibbon 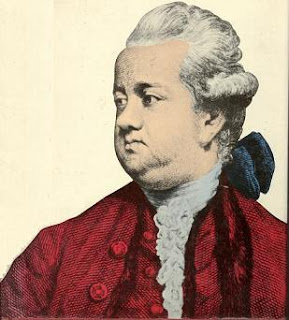 Image:  Edward Gibbon (1737-1794)
I had always heard that Edward Gibbon’s classic Decline and Fall of the Roman Empire laid much of the blame for Rome’s fall on the rise of Christianity.  I assumed he had an Enlightenment-driven antipathy toward Christianity.  In reading Goldsworthy’s How Rome Fell, however, he makes the point that Gibbon’s animosity was not so much against Biblical Christianity but Roman Catholicism.  At one point he notes:


With an Anglican’s suspicion of the papacy, he saw the adoption of Christianity under Constantine and his successors as a bad thing, which sapped the old Roman virtue and eventually caused too many people to withdraw from public life into unproductive monastic seclusion.  His attitude was all the more bitter because he had himself converted to Catholicism during his student days at Oxford.  Gibbon’s father had withdrawn his son from the university and despatched him for a thorough reprogramming in Calvinist Switzerland (p. 17).


I had not been aware of this twist in Gibbon’s biography.  This sent me to the Gibbon entry in Oxford Dictionary of the Christian Church which notes:


He was educated at Westminster and in 1752, at the early age of 15, sent to Magdalene College, Oxford, where he was converted to the RC Church (1753).  Though of short duration, his conversion was sincere.  To detach him from Catholicism, his father placed him with M. Pavilliard, a Calvinist minister at Lausanne, where by wide and systematic reading of French literature and the Latin classics he laid the foundations of his vast erudition.  In 1754 he returned to Protestantism….. (p. 564).


So Gibbon was a teenage convert to the RC who was sent to Calvinistic Switzerland for deprogramming and reorientation to Protestantism by his concerned father, and this was later reflected in his landmark Decline and Fall (published from 1776-1788).