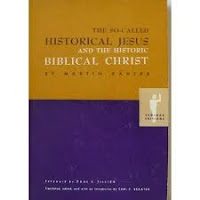 
Kähler writes to oppose 19th century attempts to reconstruct the life of Jesus based on the Gospels.  He begins, “I regard the entire Life-of-Jesus movement as a blind alley” (p. 46).  The title of the book distinguishes between the “historical” (historische) Jesus and the “historic” (geschichtliche) biblical Christ.  Braaten discusses and compares translation of these important terms on p. 21:


For Kähler, the Gospels do not provide an adequate “historical” picture of Jesus, but they do provide an adequate “historic” picture.  He contends that “we have no sources for a biography of Jesus of Nazareth which measures up to the standards of contemporary historical science” (p. 48).  He rejects, in particular, attempts to present psychological studies of Jesus’ inner life or of development in his thought from the Gospels, stating, “The New Testament presentations were not written for the purpose of describing how Jesus developed” (p. 51). Indeed, he notes, “The inner development of a sinless person is as inconceivable to us as life in the Sandwich Islands is to a Laplander” (p. 53)!  Thus, he concludes, “Without a doubt the Gospels are the complete opposite of the embellishing, rationalizing, and psychologizing rhetoric of the recent biographies of Jesus” (p. 93).  Along these lines, Kähler also adds his famous aphorism that one could well call the Gospels “passion narratives with extended introductions” (p. 80, no. 11).


Kähler wants to walk the line between both traditional (pre-critical) and modern (historical-critical) understandings of the Scripture.  He calls the choice between the two “an Either/Or.”  This means, “Either we retreat to the standpoint of the seventeenth century … affirming the inerrancy of the external features of the Bible as it was taken over at the Reformation, and rejecting any kind of historical study of the sacred text.  Or we deny that there is any essential difference between the biblical writings and other books….” (p. 110).  Both approaches, he claims, are misguided.  The purpose of the Gospels is not to provide “for a scientifically reconstructed biography of Jesus” but their purpose “is to awaken faith in Jesus through a clear proclamation of his saving activity” (p. 127).


In his critique of modern theology, Kähler offers this observation:  “The assertion of the absolutely unlimited inerrancy of everything found in our vernacular Bibles has caused a progressive uneasiness ever since the investigation of the traditions of Judaism hit its full stride” (p. 115).  In a footnote for the word “everything” in the previously quoted sentence, Kähler notes how this “uneasiness” in “everything” has included the undermining of the traditional text found in Luther’s Bible which he notes has met more opposition in Germany than in England (!):


This word has been chosen advisedly.  The situation is such that a devoted reader of the Bible has usually felt himself entitled to rely literally upon all the statements made in the headings and subheadings in Luther’s translation of the Bible.  How reluctantly a person resigns himself to the elimination of the pericope of the adulteress and of the end of Mark’s Gospel.  How enraged people become when doubt is cast upon the Mosaic authorship of Genesis, etc.  This attitude has been partly to blame for the difficulties encountered in connection with the revising of Luther’s translation.  In England, devotedness to the letter of Scripture produces zeal for a continual improvement of the translation; among us Germans it has produced a certain resentment of any such attempts; and in still others it has inspired the naïve confidence of being able to give Bible readers a more faithful reproduction of the original text, even though the translator may have a most inadequate knowledge of the biblical languages and often not the vaguest notion of the textual problems.  These mutually exclusive examples show that the starting point, the same in each instance, cannot be the correct one (p. 115, n. 26).


In the end, one might question whether Kähler’s supposed effort to stand above and beyond the fray between traditionalists and modernists is sincere.  In truth, Kähler stands steadfastly with modern theology.  Efforts like his, and that of others in liberal Protestantism, to forfeit the historical reliability of the Gospels while affirming their unique spiritual content did not salvage a high view of the Scriptures or a vibrant Christian faith.  Would that Kähler had, instead, stood with the seventeenth century Reformers in affirming both the “historic” and “historical” Jesus of the Gospels and the “historic” and “historical” Christ of faith, with no contradiction between the two.  His critique of the “Life-of-Jesus” movement, however, is usefully on target and anticipated the devastating critique of this movement in Albert Schweitzer’s The Quest of the Historical Jesus.  Though his remedy is inadequate, Kähler also rightly anticipated the way in which the application of the historical-critical method was undermining Christian faith in Germany and beyond.