The Voice: The newest new and improved English translation of the Bible 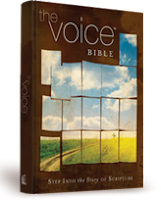 On the sermonaudio.com newsfeed I ran across this USA Today article about The Voice, the latest English Bible translation, released this month by Thomas Nelson.
The Voice is unique in that it is formatted “like a screenplay or a novel.”  The translation title apparently comes from its rendering of John 1:1 which unconventionally translates the Greek word logos not as “word” but as “voice.”  This is an interesting choice, given that there is a Greek word (phone) for “voice” (cf. Matt 3:3 where John the Baptist is described as a “voice” [phone] crying in the wilderness).  The new translation makes some other interesting choices.  Angel (angelos) is rendered as “messenger”; apostle (apostolos) as “emissary”; and, most significantly, "Christ" (Christos) is removed completely in favor of “the Annointed One” or “the liberating king.”
The website for The Voice explains its translation philosophy:
The Voice is a dynamic equivalent translation that reads like a story with all of the truth and wisdom of God's Word. Through compelling narratives, poetry, and teaching it invites readers to enter into the whole story of God with their heart, soul, and mind. This bold new translation engages readers like no other Bible.
The problem with this approach is, of course, its tendency to devalue the plenary, verbal authority of Scripture by its failure to take each and every word as valuable.  Even what the editors consider transitional words and phrases (“he said,” etc.), omitted to achieve the “screenplay” flavor, are inspired words that should not be omitted.
The translation team listed on The Voice website is an eclectic group including broad “evangelical” Darrell Bock of Dallas Seminary, "literary" Bible expert Tremper Longman III, and moderate Baptist academic Alan Culpepper.  It also noticeably includes an egalitarian flavor with several women scholars (Beverly Burrow, Sheri Klouda, Nancy deClaisse Walford).  The “writing/creative” team is even broader with a long list of pastors, poets, songwriters, and humorists.  It is also notably heavy on “emerging church” leaders like Brian McClaren, Chris Seay, and Leonard Sweet.
Though I could not find a discussion of the text on the website, they do have a search engine that allows you to read the NT of The Voice online.  I searched for a few key passages and found that it (predictably) follows the modern critical text (e.g., “He” rather than “God” in 1 Tim 3:16; bracketing the Lord’s Prayer doxology of Matt 6:14 and the pericope adulterae of John 7:53-8:11; omitting the comma johanneum of 1 John 5:7-8; etc.).  Perhaps most striking is what The Voice does with Mark’s ending.  The traditional ending (Mark 16:9-20) appears in brackets, but The Voice also includes the so-called “shorter ending” (also in brackets) after Mark 16:20:  “[And the women did everything they had been told to do, speaking to Peter and the other disciples. Later Jesus Himself commissioned the disciples to take this sacred and eternal message of salvation far to the East and the West.].”   There is an increasing tendency to include this spurious reading in the New Testament text (see the NRSV which places it in the body of the text and even the “evangelical” ESV which includes it marginally).
The Voice obviously wants to present itself as hip, colloquial, artsy, non-doctrinal, and relevant.  The website notes:
Today's translations often present the Bible as a reference book filled with facts. The Voice expresses Scripture as a narrative with engaging conversations, passionate poetry, and beautiful literature. The Voice brings literary art to the Bible. This Bible lends itself to dramatic readings; first, because of the beauty of the language, and second, because of the unique acting-script format. It is the Good Book that reads like a good book.
My question: What’s wrong with seeing the Bible as “filled with facts”?  Yes, it has some narrative, but a lot of it (like Paul’s letters) is doctrinal and didactic.  Also, at the risk of again being charged with being a KJV-Only-ist, do we really think that The Voice is significantly going to contribute to the “literary art of the Bible”?  Do we not already have an English translation that has had an immense linguistic, cultural, and artistic impact on the Western world (and beyond) over a long period of time?
The website also includes this video clip that introduces some vignettes from The Voice acted out.  Watch and listen in particular to the presentation of Jesus’ encounter with the two disciples on the Road to Emmaus from Luke 24.  Not only do we have a second commandment issue with Jesus being played by a short, hip, non-Semite, but I find the “screenplay” dialogue to be almost unbearable to (over)hear:

In case you haven’t figured it out yet, I don’t think I’m going to be a big fan of The Voice.

Here is a summary of some of the problems with The Voice as I see it:


1.      Its text and translation philosophy reflects a low view of plenary-verbal inspiration.


2.     It wrongly assumes that the reason folk don’t read the Bible is because it has not been relevantly packaged to meet their needs, rather than concluding that men most often neglect Scripture because they are not spiritually hungry to read God’s Word.


3.     It introduces yet another English Bible from Pandora’s Box into an already over-crowded market.  It is, in fact, market-driven, rather than ecclesiologically driven.  In the long run, the proliferation of such translations cheapens, rather than enhances, the perceived value and authority of the Bible.
Posted by Jeffrey T. Riddle at 1:23 PM

I watched the other video about lady wisdom, so much for the context being that this is the person of Christ crying in the streets, it's now a chick with holy (not the sacred holy but the one that affects your laundry) jeans.

It's no wonder the world is laughing at the church. This is fodder for SNL!

My sage advice to you is to switch numbers one and three in your problems list.

Cutting right to the chase, one question that is pertinent is: Is there a need for a summary or Cliff's Notes for each book of the Bible? Certainly the need exists, but this "Much Better Than New" version isn't the answer.

I didn't watch the entire clip, thanks. I'm slightly nauseated from the minute or so I did watch. Man, this stuff is bad.

Translation of the Bible is interesting. I was (still am) amazed at the number of words that don't really translate from Greek into English. For instance, there's a particular verb tense in Greek that means 'now and forever more' which we don't have in English. Things like that make a difference.

This is a good post, Padre. You've done a nice job here, and in support of your work and conclusions I will mention that the evil one is real and will oppose Christians at every turn - do you really believe that the emergence of this so-called improved translation that isn't a coincidence?

Thanks for the comment. Yes, there are a number of other videos on "The Voice" website, and I have not had the opportunity to view them all. You're right, the dialogue is so "cheesy" that it seems more like a parody than the real thing.

Thanks for the comment. I was not really thinking of the three points necessarily being a hierarchy, though I do believe the root problem with "The Voice" is with text and translation and theology of the inspiration of Scripture.

Do we need summaries of each book? Sure, many folk have done this. There are also commentaries and Study Bibles that explain passages and books. There is a difference, however, between these works (uninspired yet edifying writings about Scripture that help explain it) and loose or paraphrastic translations that claim to be Scripture.

As for your comments about the number of words that cannot be rendered from Greek to English: I am not sure I follow or can agree here. My sense is that the Greek can typically be translated in a word for word manner. I like translations (like the KJV and NJV) that place words in italic which are added to fill out the English sense but which do not have a direct correspondence in the original text (Hebrew OT; Greek NT. This way the reader can easily see what words were added that do not have a direct correspondent in the original.

I do know Biblical Greek and I am not familiar with a tense that means "now and forever more," but I get your point that not everyone knows the original languages and most must rely on translations by faithful scholars. My point is that we should choose the best translations. My conclusion is that this will require the right text (traditional/Reformation) and the right translation philosophy (word for word or formal correspondence).

I also think you are spot on in pointing out that there is a spiritual dimension to all this. Even many well-intentioned folk can fall into the trap of watering down the Word in an effort to make it "relevant."

It's all very humorous really. Liberal Christians really miss the point when it comes to the Bible.

Let's remember that this *is* God's Word we're messing with. Screwing around with it to make more "relevant" is only *asking* for trouble. It's like you said--If the Father sees fit to open the heart of a man, then he will come. If not, then there is simply no hope. Whether or not the Bible translation he is reading is "relevant enough."