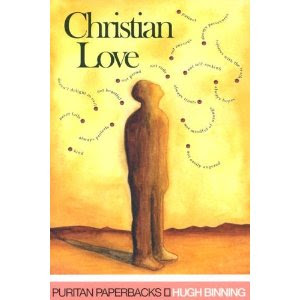 Note: Last Sunday’s message at CRBC was on Love is the fulfillment of the law from Romans 13:8-10. Here are some of the notes from the message’s conclusion:
Hugh Binning was one of the Scottish Puritans. He was born in 1627, the son of a wealthy landowner. As a young man Binning felt a call to the ministry. Sadly, he died in 1653 at the age of 26, but he left behind a classic little work titled, “Treatise on Christian love.” Binning had been involved in some very contentious religious disputes in the Scottish church, and he wrote this little book to encourage a loving spirit even, and especially, in times of dispute. This book has been reprinted in the Puritan paperback series under the title Christian Love (Banner, 2004). As I considered our text today I pulled this book off my shelf looking for practical application.
Here are five practical suggestions which Binning outlines toward the end of his treatise, to help the believer to pursue charity or love (see pp. 49-60):
1. A charitable man meditates on Scripture like 1 Thessalonians 3:12 which urges believers to “abound in love … for all men.”

By praying for all men, the Christian is “a mouth of mankind.”

2. Charity avoids offense and lives honestly in the sight of all men.
True Christianity is not “self-addicted.” Grace restores our humanity. We no longer live like wild, selfish beasts. Grace restores our reason and our affections for the things of God.
3. Charity follows peace with all men as much as possible (Rom 12:18).
In speaking about the church, in particular, Binning notes that if we have peace but not purity, then we are nothing but carnal. However, he adds, we can have purity but lack peace: “Where there is purity of truth, but accompanied with envying, bitter strife, rigid judging, wrangling, and such like; then it is defiled, and corrupted by the intermixture of vile and base affections, ascending out of the dunghill of the flesh.”

5. Charity is not a tale-bearer
Binning gives most attention to this final point. He notes, “Another man’s good name is as a pledge laid down in our hand, which every man would faithfully restore, and take heed how he lose it or alienate it by backbiting. Some would have nothing to say if they had not others’ faults and frailties to declaim upon.”
He adds that tale-bearing is “a kind of murder” and “a seminary of contention and strife among brethren.” “It is the oil to feed the flame of alienation.”
He continues, “Truly evil speaking of our brethren, though it may be true, yet it proceeds out of abundance of these in the heart: guile, hypocrisy, and envy. While we catch at a name of piety from censuring others, and build our own reputation upon the ruins of another’s good name, hypocrisy and envy are too predominant. If we would indeed grow in grace by the Word, and taste more how gracious the Lord is, we must lay these aside, and become as little children, without guile and without gall.”
Binning notes that we have a duty not to receive tale-bearing, for, he says, “If we do discountenance it, backbiters will be discouraged to open their packs of news and reports.” He adds, “To join with the teller is to complete the evil report; for if there were no receiver, there would be no teller, no tale-bearer.” And, “Covering faults Christianly will make a stranger a friend, but repeating and blazing of them, will make a friend not only a stranger but an enemy.”
He closes, “But to look too narrowly to every step, and to write up a register of men’s mere frailties, especially so as to publish them to the world: that is inconsistent with the rule of love. And truly, it is a token of one destitute of wisdom to despise his neighbor; but a man of understanding will hold his peace. He that has most defects himself will find most in others, and strive to vilify them one way or other; but a wise man can pass by frailties, yea, offences done to him, and be silent (Prov 11:12).”
May the Lord grant us the grace to “owe no man any thing, but to love one another” (Romans 13:8).
Grace and peace, Pastor Jeff Riddle
Posted by Jeffrey T. Riddle at 6:45 PM