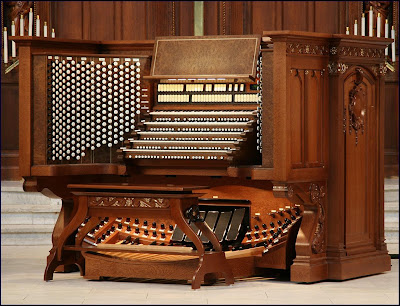 I had coffee this AM with my friend Greg C. and we got to talking about music and singing in worship.  I told him I would re-post this intro and excerpt from Spurgeon on organs:
We are not the first generation to deal with “worship wars.” In Spurgeon’s day the newest thing was not the guitar or drum set but the organ. In the Metropolitan Tabernacle the singing of psalms and hymns was done without instrumental accompaniment. In Spurgeon’s Autobiography (the titled is a bit of a misnomer since the book was prepared by his wife and secretary after this death) we read the following comments:
When William Cuff was minister at Providence Chapel, Hackney, one of the College Conference meetings was held there. The President presided, and in the course of his speech, he pointed to the organ and said, ‘I look upon that as an innovation; and if I were here, I should want it to be an outovation, and then we would have an ovation over its departure. I was once asked to open an organ—I suppose the people wanted me to preach in connection with the introduction of the new instrument. I said that I was quite willing to open it as Simple Simon opened his mother’s bellows, to see where the wind came from, but I could not take any other part in the ceremony.’
Preaching at a chapel in the country, Mr. Spurgeon gave out Isaac Watts’ version of the 91st Psalm—
He that hath made his refuge God,
Shall find a most secure abode;--
And then added, ‘We’ll sing it to the tune “Refuge”’. The organist leaned over from the gallery, and whispered to the preacher, “It is not in our tune book, sir.’ ‘Then it ought to be,’ answered Spurgeon; ‘no tune book is complete unless “Refuge” is in it;’ and, turning to the congregation, he said, ‘The last time I was here, you people praised God for yourselves, but now you have a machine to do the praising for you. If I can’t play “Refuge”, we’ll have it all the same, and I’ll start it myself.’
C. H. Spurgeon: Autobiography: Volume 2 (Banner, 1973): p. 441.
Posted by Jeffrey T. Riddle at 11:07 AM

Love it! We still have unaccompanied singing, but it's Spurgeon's 'tell it as it is' that made me smile. These guys called a spade a spade... If our ministers tried that today from the pulpit, they'd empty their churches!