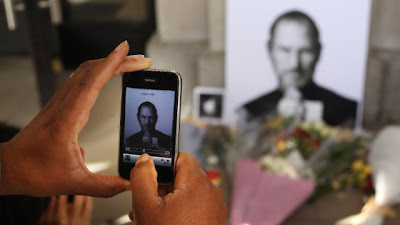 And it is appointed unto men once to die, but after this the judgment (Heb 9:27).


The story dominating the news today has been the death of Apple CEO Steve Jobs. The public praise for Jobs has been effusive. He has been called the Edison of our generation. Jobs died in only his 56th year, having survived a diagnosis of pancreatic cancer by about seven years. I do not know what spiritual beliefs Jobs held. Several reports on his life noted that as a young man he traveled to India seeking spiritual enlightenment. At a Stanford graduation speech, given after the diagnosis of his cancer, he semi-mockingly noted that even those who believe in heaven were in no hurry to go there. Jobs has now passed from this life to the next, and the Lord is his Judge.
Here are a few further spiritual thoughts that came to mind on Jobs’ death:
First, Jobs has been praised for his creativity, industry, and aesthetic sensitivity. Apple products not only worked well, but they also looked good. But where did Jobs and other designers get the raw materials with which they worked? Who created the metal, the fiber, the pigments that gave to every artist, architects, and engineer the building blocks with which they created? What is more, who gave them their bodies, their hands, and their minds? All came from a much greater Designer and Creator.
Second, I was struck by one reporter who noted that Jobs did his best work after he learned he was dying man. Jobs, no doubt, was living with urgency and passion. This reminds me of the Puritan Pastor Richard Baxter who was fond of saying that he preached “as a dying man to dying men.” In truth we are all dying men. One day we too will go the way of all flesh. The apostle Paul reminds us that “we brought nothing into this world, and it is certain we can carry nothing out” (1 Tim 6:7). Jobs lived with urgency for his business and technology. Are we living with urgency for something much greater? Are we giving all for Christ?
Today I happened to open a book titled An Exposition of Titus (first published in 1612) by the Puritan minister Thomas Taylor (1576-1632). In a brief memoir of Taylor in the book’s preface I read that Taylor also died in his 56th year after contracting “pleurisy.” He is described as “a man full of meekness, love, and charity, which most liberally he would extend, where necessity required, without sounding the trumpet, his left hand not knowing what his right hand bestowed.” On his death bed, he was said to have expressed an abundance of joy. “In Christ,” said he, “I am more than a conqueror. Oh! I serve a good God who covers all imperfections, and gives great wages for little and in mercy he has provided for me some of the greatest.” His biographer relays that he continued praying and praising God until by degrees his voice failed him. On the following Lord’s Day “he departed out of this troublesome world to enjoy a perpetual Sabbath in a better, and to be forever with Christ his Redeemer, at whose right hand is crowned all fullness of delight, and pleasures for evermore.”
When we read of the deaths of famous men, we should consider the course of our own lives.
Grace and peace, Pastor Jeff Riddle
Posted by Jeffrey T. Riddle at 9:14 PM

I'd also like to add that, as Christians, when we hear the world praise mere men, we should remember Luke 6:26:

Woe unto you, when all men shall speak well of you! for so did their fathers to the false prophets.

And when that mere human is a non-believer (Jobs was a Buddhist), Luke 11:23:

Turns out that, as far as the Lord is concerned, Steve Jobs was no less wicked than Herod, Jack the Ripper or Ted Bundy. Many of us should be careful who we canonize....