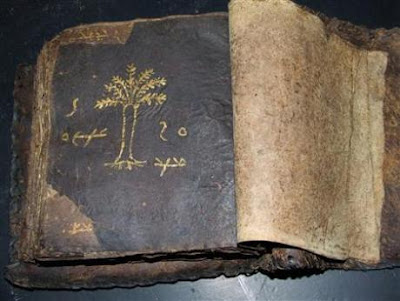 Image:  Ancient Syriac Bible
Two issues in 2 Peter 2:13:
a. Should the verb read “to suffer wrong” (adikeo) or “to receive” (komioumai)?
External evidence:
The traditional reading is “to receive.” It is supported by the corrected hand of Sinaiticus, Alexandrinus, and the majority of minuscules. The alternative reading is found in the original hand of Sinaiticus and in p72.
Internal evidence:
The adikeo reading “involves a very rare construction with misthon” (Textual Commentary, p. 703). Metzger speculates, thus, that the copyists introduced the “less objectionable” reading. Another possibility, however, is that a copyist tried to introduce a verb that made a play on words with adikias.
Translation choices:
Translations based on traditional texts:
“And shall receive the reward of unrighteousness” (AV);
“and will receive the wages of unrighteousness” (NKJV).
Translations based on modern critical text:
“They will be paid back with harm for the harm they have done” (NIV);
“suffering wrong as the wages of doing wrong” (NASB);
“suffering wrong as the wage for their wrongdoing” (ESV).
b. Should the reading be en tais apatais auton (“in their own deceiving”) or en tais agapais auton (“in their own love feasts”)?
External evidence:
The traditional reading (apatais, “deceivings”) is supported by p72, Sinaiticus, the original hand of Alexandrinus, and the vast majority of Greek manuscripts. The alternative (agapais, “love feasts”), however, appears in the corrected hand of Alexandrinus and Vaticanus. This provides yet another example where Sinaiticus and Vaticanus do not agree.
Internal evidence:
The primary question here is whether a scribe attempted to harmonize this verse with Jude 1:12 (en tais agapais humon). The modern critical text retains the traditional reading but only gives it a “C” reading. Metzger states the majority of the UBS committee “was of the opinion that the author of 2 Peter consciously altered Jude’s expression, substituting (as he does elsewhere) a more generalized expression.” He concludes that the agapais reading “is then a scribal assimilation to the prevailing text of Jude” (Textual Commentary, p. 704).
Translation choices:
Modern English translations follow the traditional text. Examples:
NIV: “in their pleasures”
NASB: “in their deceptions”
ESV: “in their deceptions”
Posted by Jeffrey T. Riddle at 12:57 PM