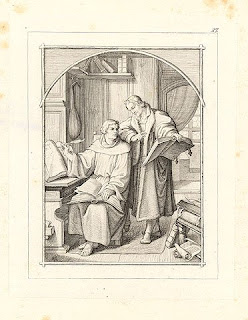 Note: This is a series of occasional verse by verse expositions of Jude. An archive of this and past commentaries may be found at the "Jude Exposition" label below.
Jude 1:16 These are grumblers, complainers, walking according to their own lusts; and they mouth great swelling words, flattering people to gain advantage.
Jude continues to dismantle the façade that the false teachers have constructed. He exposes their true identity in a rapid series of five vivid descriptions:
First, they were "grumblers." This word might also be translated "murmurers" (so it is in the AV). One lexicon defined this word as a "habitual grumbler." It calls to mind the grumbling and complaining of the Israelites in the wilderness. Numbers 11:1 says, "Now when the people complained, it displeased the LORD; for the LORD heard it, and His anger was aroused." Like the grumblers of old, these men are actually lodging their complaints against God Himself.
Second, Jude says they were "complainers." This appears to repeat the same sentiment expressed in the first description above. Jude’s double mention of this fault certainly adds emphasis to the flaw. One lexicon defined this word as meaning one "dissatisfied with life." We all know the kind of person who enjoys bursting the bubble of enthusiasm. He is never satisfied with others. For this person the church is always half empty rather than half full. As Joel Beeke has noted, pessimism is really a subtle form of pride. The one who complains wants to appear above the fray. He takes no positive action but revels in dismantling the efforts of others. In the back of his mind, he thinks, "I could have done much better, if only I had tried."
Third, these men "walk according to their own lusts." "Walk" is a picturesque way of describing how they choose to conduct or live their lives. They are self-centered. They are driven by their inordinate desires. They do not have Christ or his body at the center of their lives. Instead, they are like the ones Paul describes in Philippians 3:19 "whose end is destruction, whose god is their belly, and whose glory is their shame—who set their minds on earthly things."
Fourth, "they mouth great swelling words." This phrase in Greek literally reads: "Their mouth speaks boastful things." Note that these false teachers have a perverse unity in evil. They speak with one mouth. They do this, however, not to praise God but to toot their own horn. These men were apparently impressive public speakers, effective communicators, and skilled rhetoricians. All this is rubbish, however, because it is not used to the glory of God but to the glory of men. There is a warning here to the true church. Do not be fooled by style. Look at the substance. A man may speak well, but does he speak about the gospel? Remember that Paul’s opponents said his letters were "weighty and powerful, but his bodily presence is weak, and his speech contemptible" (2 Corinthians 10:10). The power of the message is often wrapped in the weakness of the messenger.
Fifth, they were "flattering people to gain advantage." A literal rendering of this phrase might be "marveling at [men’s] faces on account of gain." In other words, they are sycophants. They are out to win friends and influence people. They tell people to their faces what they want to hear in order to win their favor and take advantage of them. Beware the teacher who never offers you any sting or correction, but who only feeds you self-indulging compliments.
Reflections: