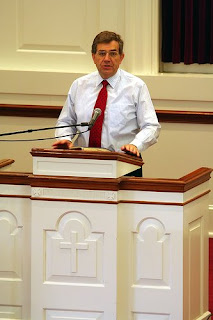 Photo: Sinclair Ferguson speaking at a past Banner conference.
Day two (Wednesday):
Morning:
Sinclair Ferguson, Senior Minister at First Presbyterian Church of Columbia, SC spoke on "Union with Christ: Gospel Foundations."
His text was Colossians 3:1-17. He began by quoting Calvin as saying that all Christ has done for us is no use to us if we are outside of Christ. He then noted the rarity of conferences that focus on the doctrine of union.
He also pointed to the ethics of this doctrine: "Shame on me, if I should ever think of a fellow believer as not being in Christ." You can preach through books of the Bible and not preach Christ. Where are the books in the Pastor’s study on Christ?
He focused on the basic structure of apostolic teaching on union as seen in Colossians 3. He noted:

From structure he moved on to substance, asking, "How rich is your exposition of Jesus Christ? How much do you read and think about Christ?"

The second morning session was Chad Van Dixhorn, Associate Minister of Grace OPC near Washington, DC who gave a short talk on "Pastoral Theology of John Chrysostom."
The third morning session was Ian Hamilton, Pastor of Cambridge Presbyterian Church, Cambridge, England on "Calvin the Pastor." Taking Philippians 3:7-16, he spoke of Calvin as a pastor noting that his first love was for "the fickle, feisty, flock" at Geneva.
He noted seven features of Calvin’s pastoral ministry:
1. Jesus is the primary Shepherd.
2. Christ animates ministry.
3. The pastor takes on the servant spirit of the chief Pastor.
4. Preaching and teaching of the gospel is the primary ministry.
5. The importance of pastoral visitation.
6. He never wearied of telling his people to get out of themselves and into Christ. He quoted Rutherford: "For every one look at self, take ten looks at Christ."
7. Served out of the overflow of his own union with Christ, with (a) an endearing humanity; and (b) a sense of his own weakness.
Afternoon:

The first session was again Van Dixhoorn on Chrysostom. To be honest, I skipped this one in favor of the bookroom.
The second session was "Calvin the Teacher" by Jonathan Watson, General Editor for the Banner.
He began with Calvin’s dying words that he had taught and interpreted the Scriptures faithfully.
He then used a three-fold division on the duty of pastors with application to Calvin’s life:
1. They are to be instructed.
God placed men in Calvin’s path who taught him the gospel and the Reformed faith.
2. They are to hold onto the faith.
He traced the struggles Calvin encountered in Geneva, including personal abuse. Some named their dogs "Calvin" to mock him; some abbreviated his name as "Cain"; others shouted and made rude noises while he preached. "On a good day he reckoned 1 in 10 in Geneva were converted; on a bad day, only 1 in a 100." Still, he persevered.
3. They are to teach sound doctrine.
Calvin was not a cold and clinical theologian but a passionate preacher and teacher. He preached through books of the Bible. His sermons were about 30 minutes in length, and he preached without notes. His sermons were simple but clear and vivid.
Evening:
Begg again spoke on "Persuasive Preaching." He took Acts 25:23-26:32 as his text and worked through the following outline:
Background.
Consider the scene (25:23).
Paul as religious prodigy (26:1-8).
Opposition and persecution (26:9-11).
Divine intervention (26:12-18).
Explanation (26:19).
An interruption (26:24).
Application (26:27). He noted Paul’s winsome engagement designed to persuade.
JTR
Posted by Jeffrey T. Riddle at 5:34 PM