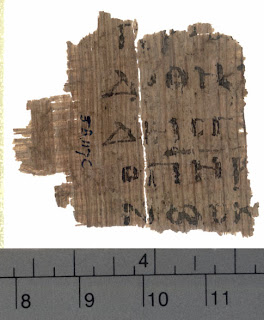 Left photo: A fragment of Jude known as Papyrus 78 dated to the 3rd or 4th century.
Note: This is a series of occasional verse by verse expositions of Jude. An archive of past commentaries may be found below under the label "Jude Exposition."
Jude 1:12 These are spots in your love feasts, while they feast with you without fear, serving only themselves. They are clouds without water, carried about by the winds; late autumn trees without fruit, twice dead, pulled up by the roots;
Jude seems to draw from an endless supply of metaphors to describe the dangers and destitution of the false teachers he is battling. In vv. 12-13 he provides five such metaphors. The first three of these come in v. 12. The false teachers are:
First, "spots in your love feasts." The Greek word for "spot" here is spilas. It might also be translated as "stain." Imagine how the spilling of food on a perfectly clean garment spoils its otherwise pristine appearance. The "love feasts" apparently refers to special meals that the early Christians celebrated alongside their observance of the Lord’s Supper (see 1 Corinthians 11:17-34). Paul accused some in Corinth of unseemly, selfish, and irreverent behavior at such meals (see especially 1 Corinthians 11:20-22). Jude rebukes the false teachers as being "without fear." That is, they do not fear God or consider how he views their actions. Jude says they only "serve themselves." The word for "serve" here is poimaino. It is usually translated as "to shepherd" or "to tend as a pastor." Thus, they are like the shepherds (leaders) of Israel whom Ezekiel accused of being concerned only with feeding themselves and not with care for the flock of God (see Ezekiel 34:2, 8, 10).
Second, "clouds without water." The false teachers are like clouds that block the sun but yield no rain. They prohibit one good and withhold another. This image is also one of instability. They are "carried about by winds." Paul urged the Ephesians not to be "carried away with every wind of doctrine" (Ephesians 4:14) even as James warned against the "double-minded man, unstable in all his ways" (James 1:11). These peddlers of deception have no fixed and stable doctrinal convictions. One day they teach one thing, the next something completely contradictory.
Third, "late autumn trees without fruit." The late autumn is the time for harvest. It is the time for Thanksgiving. But when the harvesters come to these trees they find no fruit. They are barren. Jesus taught that false prophets could be discerned by their fruit (see Matthew 7:15-20). The lack of fruit reveals a lack of life. It is not that these trees are merely dormant. They are "twice dead, pulled up by the roots." They will never produce fruit, because they have no life in them. So too are the false teachers. Unless they repent, they too will be "twice dead," as they experience physical death and after that "the second death" which is God’s judgement for their wickedness (cf. Revelation 20:14).
Reflections: