In Defense of the Lewis and Clark Statue 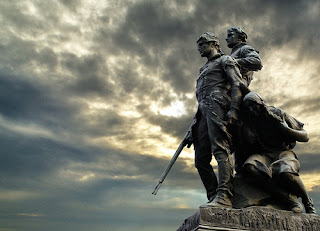 The Daily Progress had an article on Tuesday about a protest that took place at the Lewis and Clark Statue (pictured above) Monday on West Main Street in Charlottesville. The protest took place on Columbus Day (Get it?) and the leader takes offense at the fact that the Indian guide Sacagawea is pictured in a "subordinate position" in the 1919 statue. She would like to see the statue removed or a plaque placed to correct the "historical inaccuracy."
Here are the problems with this protest:
1. As Ms. Hemenway of the Lewis and Clark Exploratory Center points out in the article, the placement of Sacagawea is likely to depict her as tracking not cowering.
2. Without disparaging the important role of Sacagawea, the statue's primary goal is to honor Lewis and Clark and their role in Western exploration. Like it or not, these men were the leaders of the expedition. To think otherwise it is engage in historical anachronism. Anyhow, isn't it, in fact, honoring Sacagawea by including her in the scene, even if in a supporting role?
3. Isn't this kind of protest an example of censorship? Is the artist who made the statue (even though long dead) to be denied the freedom to express himself using the arrangement of figures and design that he chooses? My guess is that those protesting are unware of the irony of their actions. They want the right to express their views, but they want to deny the expression of the artist and those who enjoy the statue. Perhaps they should raise funds to place their own statue of Sacagawea (sans Lewish and Clark), but please don't censor this one.
JTR

Why are you so upset about this, and what do you mean by "get it?" with respect to Columbus Day? I guess I don't get it. Call me dumb, or a little suspicious.

I remember when I was a kid, we had a statue erected by the Klan just outside our Catholic church. It was a soldier depicted as throwing a grenade at the church, and he had a gun in his other hand. Even as far back as the 1970s, they had the decency to take the weapons out of the soldiers hands, leaving just the scowl on his face.

Public art is always controversial, and it frequently does not age well because values age. Statues can be removed, changed, and altered. Truly timeless art transcends this kind of thing, and I would NOT call that statue timeless.

I say, let it go. It's a new generation, and they have a right to change things. It's an artist -- not God, for goodness sake. He's the only thing eternal, don't you think?

"...for dust you are and to dust you will return." Right?

1. As for Columbus Day. The article linked notes:

"So this year, Tidwell organized a protest on Monday, Columbus Day, because she said it was Columbus’ discovery of America that led to the deaths of many Native Americans."

The point is that Tidwell sees "Columbus Day" as nefarious and thus appropriate for her protest.

2. As for your childhood memory of a Klan-erected, grendade throwing statue near your Catholic Church, I find this curious. Just to get the facts straight, would you mind naming the church and its location (city, state)?

3. I do not share your opinion that this statue has not aged well. I like it. It celebrates an important event in US history with a direct tie to our C-ville community.