Book Review, Part 1: John MacArthur's "Because the Time is Near" 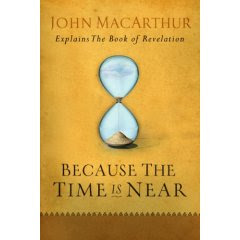 Note: This is part one of a two part book review.

John MacArthur, Because the Time is Near: John MacArthur Explains the Book of Revelation (Chicago: Moody Publishers, 2007): 360 pp.

John MacArthur made waves at his March 2007 Shepherd’s Conference by preaching a message titled “Why Every Self-respecting Calvinist is a Premillennialist,” in which he insisted that “real” Calvinists will hold a premillennial eschatological view. This exposition of the book of Revelation in a popular, easy to read format also reflects MacArthur’s essential commitment to a premillennial, and more particularly dispensational, understanding of the doctrine of last things. The fact that it reflects MacArthur’s pre-tribulational, premillennial, dispensational views is evidenced by the back cover endorsements from Left Behind authors Tim LaHaye and Jerry B. Jenkins. The reader finds, however, that a plain sense exposition of Revelation is actually hindered by MacArthur’s presuppositional commitment to his end times theological system.

The brief introduction (pp. 7-14) lays out MacArthur’s hermeneutical commitments. He affirms the traditional view that John the Apostle is the author of Revelation. He advocates a later date for the book, during the reign of Domitian (c. 96 A. D.), rejecting the views of Preterists who advocate an early dating of the book as written during the reign of Nero (c. 68 A. D.).
Most significantly, he makes clear his adherence to the standard dispensational timeline: a pre-tribulational rapture of the church, a seven year period of tribulation, a “great tribulation” in the final three and a half years of the seven year tribulation period, the second coming of Christ, the battle of Armageddon, the thousand year earthly kingdom of Christ (the millennium), the great white throne judgement, unbelievers cast into the lake of fire, and the redeemed in a new heaven and new earth.
MacArthur is also particularly keen to insist that his exposition of Revelation will follow a strict “literal interpretation” rather than “an allegorical or spiritual approach” (p. 10). If one denies “the plain meaning of the text” then he quickly gets “lost in a maze of human invention” (p. 10). He outlines four main approaches to Revelation (preterist; historicist; idealist; and futurist), concluding that only the futurist view meets the criteria of literal interpretation. The preterist approach ignores the book as future prophecy. The historicist view too often resorts “to allegorizing the text” (p. 13). The idealist approach, likewise, reduces the book to “a collection of myths designed to convey spiritual truth” (p. 13). According to MacArthur only the futurist approach “takes the book’s meaning as God gave it” (p. 14). He prefers this “straightforward view” (p. 14).
With his interpretive rationale completed, MacArthur proceeds to a verse by verse exposition of the book. He breaks his study into three parts: Part 1 “The Things Which You Have Seen” (1:1-20); Part 2 “The Things Which Are” (2:1-3:22); Part 3 “The Things Which Will Take Place after This” (4:1-22:21).

I found the most helpful sections of this book to be Part 2 in which MacArthur exposits the letters to the seven churches. The historical background information on the settings of the seven cities, for example, is filled with many fascinating insights that the preacher might mine for homiletical jewels. Progress in other sections of the book, however, is impeded by two steep obstacles: (1) the fact that MacArthur’s reading of Revelation superimposes his preconceived dispensationalism on the text; and (2) his inconsistent application of literalism.

The Problem of a Superimposed End Times Scheme

First, MacArthur’s analysis suffers from his insistence that Revelation must fit into his dispensational presuppositions. The dispensational scheme does not naturally emerge from the text, but it must be forced and superimposed over the text like an ill fitting article of clothing. MacArthur assumes a pre-tribulational rapture, for example, without ever explaining why the texts he cites (John 14:1-4; 1 Cor 15:51-54; 1 Thess 4:13-17; see p. 93) in support of this view might not merely be interpreted as the final and ultimate second coming of Christ. The primary text in Revelation itself he presents for the rapture is 3:10 (“I also will keep you from the hour of trial…”), but this is too heavy a burden to rest on such a slender limb. He makes repeated reference to the non-Biblical term “tribulation saints” without ever explaining why the reader should understand Revelation’s references to “saints” as referring to anything other than all believers of all ages. No such distinction is ever clearly made in the text, but it must be superimposed by presupposition. The seal, trumpet, and bowl judgements are likewise forced into the seven year tribulation scheme without direct textual support. MacArthur, further, claims that the fifth seal “marks the midpoint of the tribulation” but offers no clear text to support this claim (p. 132). He makes further reference to another term never actually found in Scripture, “the millennial kingdom.” He assumes the reestablishment of a “tribulation temple” and a millennial temple, only able to appeal to Ezekiel 40-48, since the text of Revelation contains no such straightforward teaching (see pp. 148, 180).

MacArthur’s insistence on acceptance of the dispensational grid leads to some odd interpretations that stray from plain sense readings. An example would be his interpretation of the marriage of the Lamb in 19:7-10. Rather than see both the bride and the wedding guests as representing all believers, MacArthur insists in making an artificial distinction between Christians. For him the honored place of the bride is reserved for “the church-age believers” while the guests are the Old Testament and tribulation saints (see p. 286). No such distinction is made directly in the text, and it is hard to imagine anyone coming to this conclusion who does not come with dispensational presuppositions.
Posted by Jeffrey T. Riddle at 8:22 AM

Does one have to limit himself to using only the book of Revelation to exposit the text or is one allowed to consider other scriptures to aid in understanding?

It appears to me that you have established a rule whereby Dr. MacArthur may not use any other scripture to establish what he believes with respect to the book of Revelation. I doubt that you would limit yourself in such a way when preparing a sermon on a particular passage in another book.

To illustrate, you say the text does not distinguish between classes of believers (Rev. 19:7-10), which is true if that's the only source of information one may use. However, if one believes the entire scripture is given by God then one could perhaps see that distinction taught elsewhere.

I also find it odd, for example, that you say the term "millennial kingdom" is not found anywhere in scripture. While it's true the term isn't found there, the teaching that certain persons live and reign with Christ one thousand years is there. If you want to apply that kind of logic, please direct me to where the term "Trinity" may be found in scripture.

I have other comments on your review, which I may return to share later, although I doubt they will have any impact on your low view of dispensationalists. -RT

MacArthur would never want anyone to read, or even know about, a recent book which for the first time reveals the long-covered-up dirty linen of the dispies. It is called "The Rapture Plot" (Armageddon Books) and it reveals how, when, and by whom the pre-tribulation rapture view came into being in the 19th century in Britain. You can't believe the amount of dishonesty (plagiarism, changing of early rapture documents, etc.) in its 177-year-old history. The book is not for the immature or faint of heart. Many top Christian scholars have publicly endorsed it (Google "Scholars Weigh My Research"). If interested, check it out; you won't be disappointed!
Jon

No library is complete without the best documentation in book form of the pop pretrib rapture view which is less than 200 years old. I refer to MacPherson's bestselling, 300-page book THE RAPTURE PLOT which Armageddon Books carries at the lowest (I've found) price. But don't read it if you're sure you know all about the plot (what no pre-1995 book had even a hint of) which, after hundreds of changes were subtly made in early "rapture" documents in the 1800s, allowed the plotter (I dare not reveal his name) to claim that Darby was the pretrib rapture originator - a grand assumption lasting now for more than a century! Top scholars, from Bruce to Lindsell to Tenney to Rushdoony to Gundry to many others, have endorsed the research that produced the PLOT book which reveals the inherent dishonesty that has long riddled the same latter-day system. John D.

The link below is a review of The Rapture Plot by a Dispensationalist.

I have always wondered about those who see the Supper of the Lamb so far into Rev., and say that somehow it is for some, but not others who are equally covered by the Blood of the Lamb. All through history the Father's Prophets are killed and hunted, the born again believers are killed and hunted, the end of the age saints are killed and hunted. Noah goes THROUGH the flood, Daniel survives THROUGH the night in the lions den, the 3 Hebrew men go THROUGH a fiery furnace, the Hebrew children go THROUGH a sea into a wilderness where Father feeds them for nigh 40 years (camped in 42 locations / 42 months is 3 1/2 years, just a nugget) Yet will all that, and the Word that says the LAST trump..../ endure till the end..../ And the woman fled into the wilderness, where she hath a place prepared of God, that they should feed her there a thousand two hundred and threescore days.....and on and on it goes. Yet those in comfort now say "we are special", all we have to do is fly away" then right after the special one use the "Get out of tribulation free card" we are right back to saints being killed and hunted.....please gimme a break. I would love to be able to think I will just fly away, but the more I study, the more I see I better have a lamp full of oil for the dark night coming!