Pausing to give thanks for the Reformers 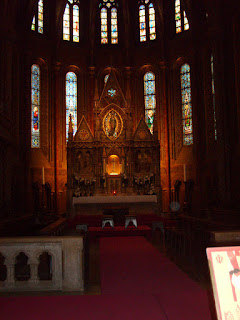 Another Hungary trip reflection.
At the end of the week, we took a Saturday (7/7) trip into Budapest. While there we visited the Szent Matyas Templom in the Buda Castle district. This ancient church was the site of the coronation of Istvan (Stephen) the first Christian king of Hungary a thousand years ago. It was converted into a mosque when the Turks controlled Hungary. Legend has it that the battle to retake the building was turned by an apparition of Mary to its Muslim defenders.
While inside we visited an upstairs church museum which contained numerous relics, including a shriveled foot of some saint and a tooth from St. Francis of Assisi.
Before we left the dark, cavernous sanctuary, I had to pause to give thanks for men like Luther and Calvin and the other Reformers who recovered the gospel and proclaimed it throughout Europe and into places like Hungary. What courage it must have taken to boldly preach Scripture and proclaim its focus on Jesus as the one Mediator between God and men rather than on Mary and the saints! What incredible superstitions they must have encountered with the truth of God’s Word!