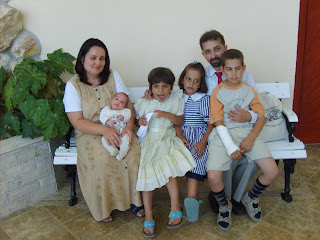 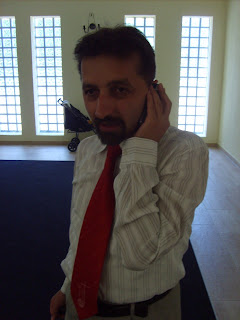 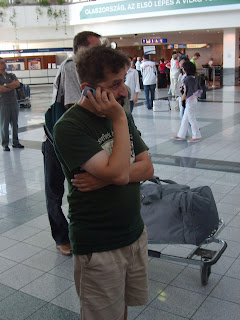 It is hard to describe the energy of Pastor Racz Lajos (The first name is "Lajos"; Hungarians place last name first and first name last). I said the other day that if he had not been a Pastor I think he would likely have been a very successful business-man. Lajos has an entepreneurial spirit which aids him immensely as a church planter. Lajos has drawn a cadre of other young families to his ministry. He typically trains them for a season and then sends them out to plant churches.
I first met Lajos 17 years ago when he was in his early 20s and a student at the Hungarian Baptist Seminary (then located on the Rozsadomb in Buda-it has since moved to its pre-WW2 location in Pest, reclaiming the building which the communist government took away without compensation and gave over to the North Koreans to use as their embassy). Lajos was constantly on the phone while we were there.
He is married to Mariann and God has blessed them with four children (a son Manase; twin girls, Ana-Abia and Priscilla; and a newborn son Jakim). Both Lajos and Mariann have a Jewish ethnic heritage. One thing I noticed while in Bicske was that it seemed the families (especially of believers) were larger than I had remembered when I lived in Budapest. It may just have been that we were in the country and not in the city, but I do not think this was the only factor for the believers. Hungary, like the rest of Europe, is facing rapid population decline. I was talking to one young couple in the church (Ilona and Miki) who have two infant children and telling them that some Christian families in the US are also getting larger and some have embraced this as a strategy for long-term culural influence ("if you can't beat 'em, outbreed 'em) not to mention obedience to the Gen 1:28 mandate.
JTR
Posted by Jeffrey T. Riddle at 3:07 PM