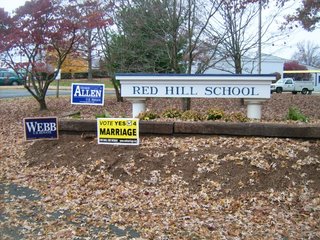 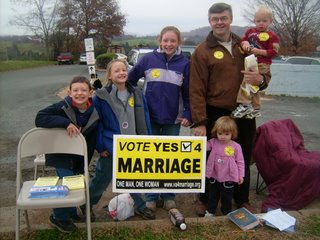 I had the 6 am to 9 am slot working my voting precinct at Red Hill School in Albemarle County this morning for the marriage amendment. The older children joined me for a living civics lesson. The photo was taken when Llewellyn came to vote and we were watching Isaiah and Madeline (Marshall, whom we are keeping till her mom and Dad, Heidi and Chris, come home today from the hospital after the delivery of her brother Benjamin).
Working the precinct was an eye opener. Observations: I did not realize what a strong Democratic presence there is in my precinct. My family was there from 6-9 am but after us we had no replacements to pass out flyers for the amendment. We left our material at the Republican table. A few people gave us a positive response; most seemed indifferent, but a few were snippy and even rude. When I left to drive out I noticed that someone had taken down my sign in front of the school entrance and thrown it on the ground (see the photo after I put it back up). A couple of women were there early working agressively to hand out flyers urging rejection of the amendment, and they were joined by a young woman with a dog (that was an interesting contrast--a single woman with a dog against the marriage amendment and Dad with three children for it) and a man who told me he was a counselor and was sure that if the amendment passed it would lead to an increase in domestic violence (I politely disagreed). Celebrity sighting: Got to see Mary Chapin Carptenter show up to vote. When the Republican poll worker offered her male companion a sample ballot he responded: "No thanks! I'm against racism!" Also got to see several of my friends and neighbors including Roy Cress from church who bought us breakfast at the Trading Post store around the corner from the school.
The last Mason-Dixon poll before the election showed support for the marriage amendment slipping to only 49% approval. We'll see what happens.
JTR
Posted by Jeffrey T. Riddle at 10:13 AM