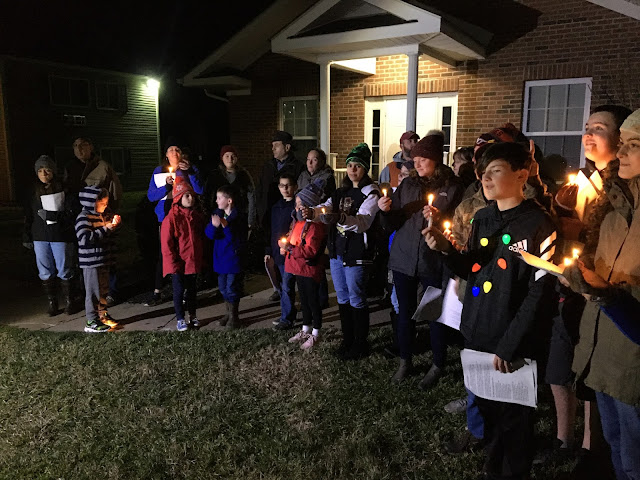 Note: Devotion taken from last Sunday's sermon on Matthew 1:18-25 (not yet posted to semonaudio.com).

Now the birth of Jesus Christ was on this wise: When as his mother Mary was espoused to Joseph, before they came together, she was found with child of the Holy Ghost (Matthew 1:18).

Matthew 1:18 begins with a heading for the narrative to follow: “Now the birth of Jesus Christ was on this wise….”

In one of the earliest confessions of faith, the Apostle’s Creed, the doctrine of the birth of Christ is rightly affirmed as essential to orthodox faith, confessing him as one “who was conceived by the Holy Ghost, born of the virgin Mary.”

The Biblical foundation for this is found in Matthew 1:18, which continues, “When as his mother Mary was espoused to Joseph….”

In those days among the Jews, it was common to have a formal engagement or espousal agreement between a man and a woman, as a preliminary step, before they formally entered into marriage.

Matthew adds, “before they came together.” This is, of course, a discreet way of saying, “before they shared in conjugal intimacy as husband and wife.” Such intimacy would not have been allowed during the engagement or betrothal period.

And he continues, “she was found with child of the Holy Ghost.” I think the language of the KJV here is just right in its ability to be circumspect and discreet but also plain about the scandalous circumstances. She and Joseph had not yet come together, and yet she was found to be with child! Contrast the KJV rendering with the crassness of some modern translations (like the NIV).

In Luke’s account he tells us that the angel Gabriel announced this to Mary even before the miraculous conception, “And the angel answered and said unto her, The Holy Ghost shall come upon thee, and the power of the Highest shall overshadow thee: therefore also that holy thing which shall be born of thee shall be called the Son of God” (Luke 1:35). The description brings to mind the work of the Holy Spirit at creation with the Spirit moving upon the face of the waters (Genesis 1:2).

How did this conception take place? What were the details? We are not told. It reminds me somewhat of the way the resurrection will be described. There is not detailed description of how it came about, but just a declaration that it did come about.

Christ was conceived in the womb of a virgin of the Holy Spirit. We know this conception came about in such a way that neither Joseph nor any other man was the natural father, but in such a way that Mary was rightly called his natural mother. He shared in the fleshly nature of Mary. One medieval theologian put it this way: When God made the Eve, the first woman, in the garden, he did so by taking from the rib of Adam. But when the second Adam, the Lord Jesus Christ, was conceived by God, he did so by taking “the virginal flesh [of Mary, a daughter of Eve] without seed” (see St. Symeon the New Theologian, The First Created Man, 96).  We might say: The first woman, Eve, was made without a woman. The true man, Christ, was made without a man.

There is no naturalistic explanation for this. If there was, it would not be a miracle, which it is!

Today we affirm and defend the doctrine of the supernatural conception and the virgin birth of Christ. We can affirm with the Apostles’ Creed that we believe “in Jesus Christ, his only Son, our Lord; who was conceived by the Holy Ghost, born of the virgin Mary.”