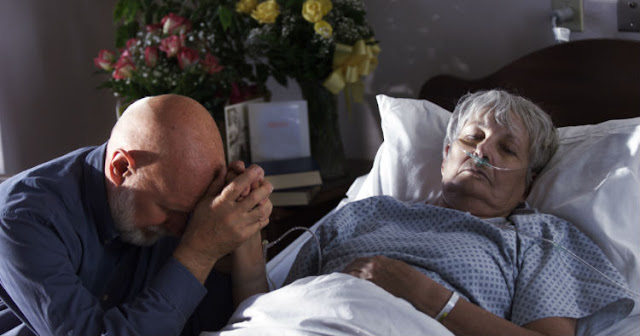 Is any sick among you? Let him call for the elders of the church; and let them pray over him, anointing him with oil in the name of the Lord: And the prayer of faith shall save the sick, and the Lord shall raise him up (James 5:14-15a).

There are several things to be noted here:

First, notice that it is the duty of the person who is sick and in need to call upon the elders of the church to pray for him. The elders are not clairvoyants who know without being told what the spiritual needs of the flock are. It is something of a stereotype in some churches with immature or even unconverted “members” that they get upset if the pastor does not initiate visiting them or calling upon them if they are sick. But James says the duty here is upon the sick to make their need known to the elders.

Second, it assumes that in the church there will be a plurality of elders.

Third, it assumes that a special part of the elders’ work will be prayer. This follows the pattern of the apostles in Jerusalem who set apart seven men to wait on the tables of the widows so that they might give themselves to prayer and the ministry of the Word (Acts 6:4).

Fourth, it suggests the manner of prayer. That the elders pray over the sick and that they anoint him with oil in the name of the Lord (v. 14).

The emphasis here should not be upon the use of oil. This kind of reading leads to ungodly superstition. There were those who have twisted this verse to teach the doctrine of so-called extreme unction, that there must be special prayers for those who are sick unto death.

I agree with Matthew Poole that anointing with oil was an “outward rite” used by some in those times (cf. Mark 6:13), while many other healings took place under the ministry of Christ and the apostles only at a word or with the touch of the hand. This was not “an institution of a sacrament” but a command to the elders of apostolic times.

Again, the emphasis here should not be upon the mention of oil, for God is surely not dependent upon any outward means and can do as he pleases, but the emphasis should be upon prayer being offered in the name of the Lord, that is, according to his will (cf. John 14:13-14).

Fifth, it suggests the outcome of prayer (v. 15a): “And the prayer of faith shall save the sick, and the Lord shall raise him up.” The prayer of faith means the prayer offered up in faith (trust) in God, and with resignation to his will. The verb “to save” has a double meaning. It can refer both to saving the body from sickness and death, at least temporarily, but, more importantly, it refers to saving a man from the second death, the saving of his soul, and the granting of eternal life.

We were talking about Job last week and the temporal reversal of Job chapter 42 so that “the LORD blessed the latter end of Job more than his beginning” (Job 42:12), but even Job did eventually die.

Consider John 6:44: “No man can come to me, except the Father which hath sent me draw him: and I will raise him up at the last day.” Even if the Lord does not raise his servant from the sick bed, he will surely, in the end, raise him from the grave!