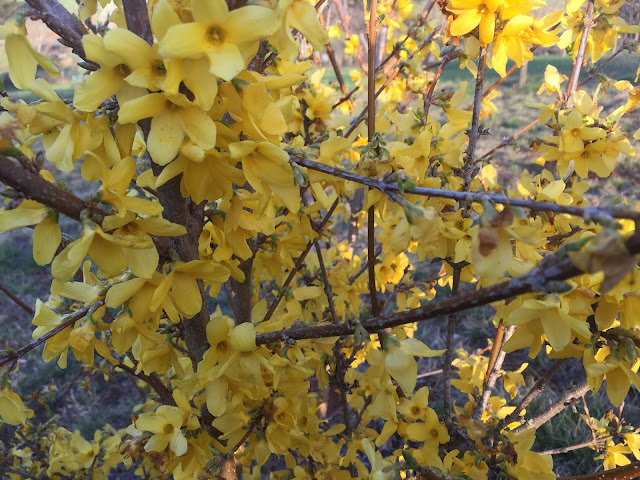 Image: Forsythia, North Garden, Virginia, April 2018
Note: Devotion taken from last Sunday's sermon on John 8:48-59.
Let me draw three statements from John 8:48-59 for reflection:
First, look at v. 51 where Jesus said, “If a man keep my saying, he shall never see death.”
Think of how people try to escape the first death. Think of the explorers who looked for the fountain of youth or moderns who want to freeze their bodies in hopes they might be preserved till a time when diseases are cured. Consider health foods, diet, exercise, essential oils, yoga, running, meditation, surgery, etc.
Even funeral homes work to make the dead look alive!
But believers know that the wages of sin is death. The mortality rate is 100%!
There is, however, a way not to die, that is, not to experience the second death, eternal death. And that way is by honoring the Son and by believing and keeping his words.
Second, look at v. 53, when the crowd asks Jesus, “Whom makest thou thyself?”
Who did Christ make himself out to be? Did he make himself out to be just another ordinary man? Or did he make himself out to be something more? And what is your verdict? Are you with the unbelieving crowd or with the apostles?
Third, look at v. 58, where Jesus said, “Before Abraham was, I am.”
Now, what mere man could say such a thing? Imagine you are visiting Monticello in Charlottesville and you meet a man who says, “Jefferson rejoiced to see my day. Before Jefferson was, I am.” Would you not say that such a man was beside himself? But when the earliest followers of Jesus heard Christ say, Before Abraham was, I am” they believed it to be absolutely true. In fact, they were willing to die for him and for this truth.

Now, where do you stand?