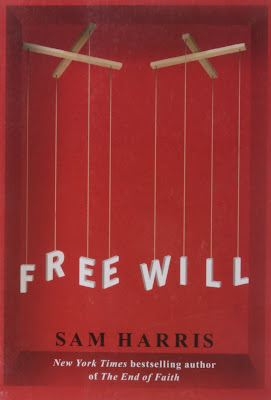 I read Sam Harris’ little book Free Will (Free Press, 2012) just before our Ukraine trip and have been meaning to post some thoughts on it.

The outspoken atheist Harris argues that free will is an illusion. He even says, “The illusion of free will is itself an illusion” (p. 64). Harris essentially upholds biological determinism. Everything you will do, say, or think is biologically destined. You only think you have a choice.

Take a moment to think about the context in which your next decision will occur: You did not pick your parents or the time and place of your birth. You didn’t choose your gender or most of your life experiences. You had no control whatsoever over your genome or the development of your brain. And now your brain is making choice on the basis of preferences and beliefs that have been hammered into it over a lifetime—by your genes, your physical development since the moment you were conceived, and the interactions you have had with other people, events and ideas. Where is the freedom in this? Yes, you are free to do what you want even now. But where do your desires comes from? (p. 41).

The human sense of free will imposes ethics and tricks you into thinking you have freedom, but this is not, in fact, the case. For Harris it is all a matter of “luck.” He was lucky, while criminals and psychopaths are simply profoundly unlucky. Even laziness, like diligence, is “a neurological disorder” (p. 62). Man is a “biochemical puppet” (p. 47).

Again, Harris is an atheistic determinist. Though he makes an effort to argue for “moral responsibility” despite the fact that humans are little more than “neuronal weather patterns”, it does not come off as very convincing (p. 48).

As a Calvinist I can appreciate a lot about Harris' skepticism toward the conventional views of free will. What’s the difference, however, between Harris’ rejection of free will and, say, that articulated by RB pastor Walt Chantry in his tract The Myth of Free Will? Chantry says man’s will is bound by sin, rooting man’s path and his hope in the decree of God. Harris takes man back to his biology but does not tell us where the biology comes from. Despite the brave face, for Harris life is nihilism, nothingness, no meaning, no purpose. I find (choose?) chapter 9 of the 2LBCF to be a more satisfying account of things.