Note: We got back from our Ukraine trip last week. Once back I had sermon prep for two sermons on Sunday and then prep for three fall semester classes which all started this week: Survey of the NT; NT and Early Christianity; and World Religions. The blog has been dormant, but here’s a catch up with my trip journal, if that's not too self-indulgent--oh well, I guess it is my blog after all. 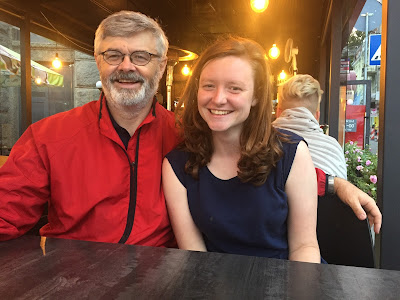 Image: With HR at supper in Kiev.

With much excitement and anticipation (and some exhaustion after preparing and packing) we headed off to Washington, Dulles to begin our journey to Ukraine on Monday afternoon August 7. We arrived in Vienna Tuesday morning August 8 and then boarded a plane to Kiev. From Vienna we had called our hotel (Hotel Imperial Rus) to arrange a shuttle pickup at the Kiev airport. A friendly driver, Dimitry, met us when we landed and we were on our way to the hotel in the city center. The Hotel Rus is a high rise, three-star hotel we had booked via TripAdvisor and had been recommended to us by Hannah as a hotel the Peace Corps staff recommends to visitors. Our 19th floor room was small but it has a/c, a scenic view of a sports stadium, wi-fi, and was just a short walk from the “Sports Palace” metro stop. The room cost only c. $36.00 per night and included a full-spread Eastern European buffet breakfast.

After unpacking, we made our way into town to do some exploring. Observations: Central Kiev reminds me a lot of Hungary and other Eastern European countries I have visited. There are lots of Soviet era concrete structures, many now crumbling, but also many attractive, renovated Hapsburg era and new modern buildings. It is a challenge and an adjustment to read the Cyrillic signs.  We get on the metro at the “Sports Palace” and find it fairly-easy to negotiate. An unlimited distance one-way fair is 5 UH or about $00.20. Another observation: The dollar is strong and prices are inexpensive by American standards. We get off at the “Theater” stop intended to walk to the “Golden Gate” but get confused by the Cyrillic signs and spend about a half hour getting our bearings. We get some hot pastries and a coffee (me) and coke (Llew) at a street shop as we walk. Hannah calls from the Peace Corps close of service conference she’s attending just outside Kiev and we make plans to meet her that evening at Independence Square. 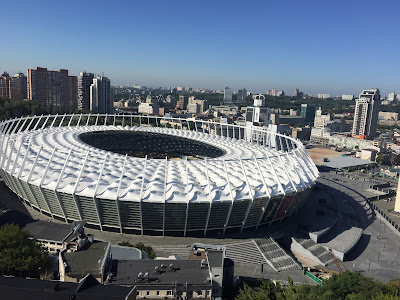 Image: View from our hotel window in Kiev. 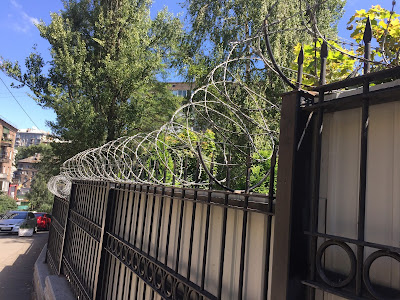 Image: Fences and barbed wire around houses and buildings reminded me of being in Hungary post-communism.

We walk past the Opera House to the “Golden Gate” (one site of Kiev’s medieval wall) and on to Saint Sophia Cathedral, the cradle of Orthodox Christianity in Ukraine, a church complex dating to c. AD 1037, and a UNESCO world heritage site, with its stunning white and green exterior and golden domes.  We pay 80 UH each to go inside and tour the grounds and the ancient cathedral. 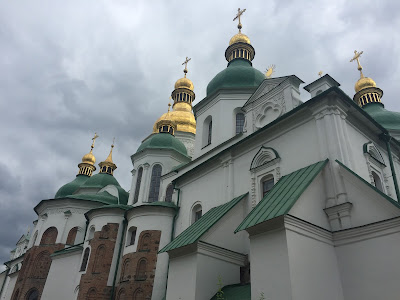 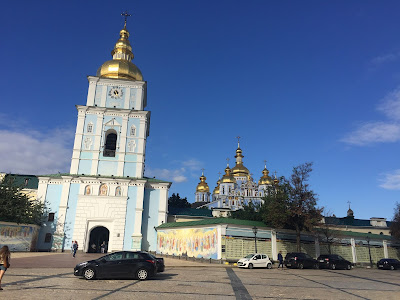 From there we walk across the square to the pale blue exterior and golden domes of St. Michael’s Cathedral and Monastery. Here we look at the notices along the walls with pictures of those killed in recent fighting on the Russian border. It was a reminder that though we feel very safe in Kiev this is a nation at war. At the bottom of the hill we see another memorial, this one to those who died in the Maidan uprising and then made our way up to Independence Square with its soaring pillar monument. 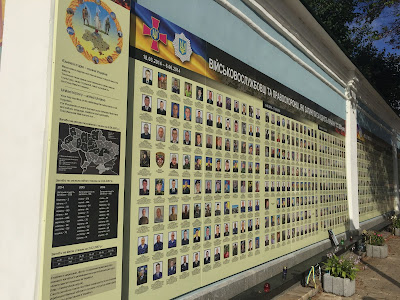 Image; Memorials to those recently killed in fighting on the Russian border, near St., Michael's. 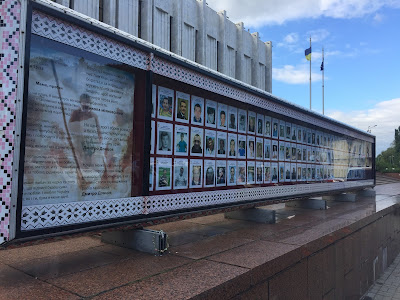 Image: A memorial to those killed in the 2014 Maidan revolution. 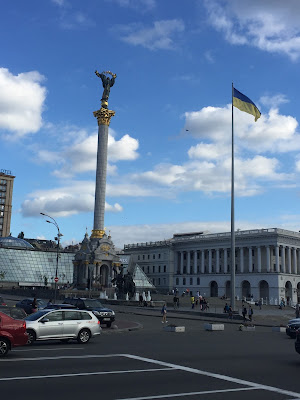 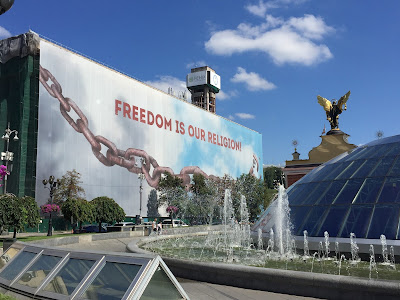 Image: The trade building set afire by the embattled government forces in 2014, now covered with banners reading, "Freedom is our Religion."

We meet Hannah in the square and get to see her for the first time in nearly two years. Much rejoicing. We are approached by some young English students looking to have some conversation practice, and we chat with them for a while. 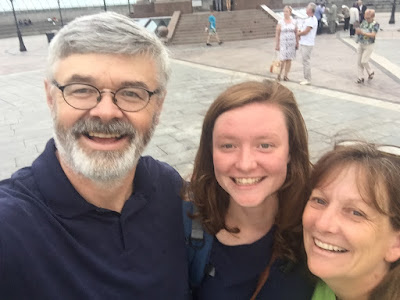 We walked over to a Ukrainian restaurant on the square for supper and eat outside on the patio with a view of the square. The food is good, but I can’t tell you what it was called (some sort of meat and pastry)! Hannah orders for us. After two years, she is now comfortable and capable with Ukranian. She reminds me of how we were near the end of our two years in Budapest, once we had some comfort with the language. 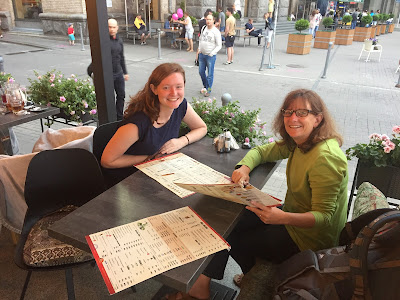 We take an evening stroll over to a monument and an overlook by the river than take the metro back to the stop near our hotel. We get back to our room about 10:00 pm Kiev time Tuesday evening, not having really slept since Sunday night. No problems falling asleep. Hannah spent the night in our room and left early the next morning to get back to finish her conference.

After seeing Hannah off, we enjoy the hotel breakfast buffet (much praised on tripadvisor). The food was not bad and there was a self-serve coffee machine where I had more than one café americano with milk.

After breakfast, we set out on foot again for the metro stop. We stopped, however, at a church near the hotel where there was plenty of activity. Women with white habits were serving food to visitors outside. If I understood correctly one of the women with whom I talked the church is part of a monastic community with about 100 sisters. Inside the church I found visitors circulating the interior furnished with no pews, venerating scores of icons and relics (including several skulls). Soon I heard some resonant male voices, the priests on the floor and some male singers in the loft singing a liturgy (at first, I thought the voices were recorded, but then realized it was quite live). I watched the start of a wedding ceremony for an older couple which included a younger pair standing behind them and holding crowns over their heads. This was my first experience in an Orthodox church. Fascinating. 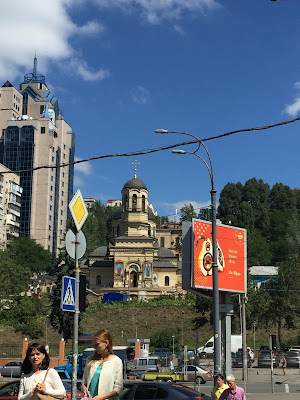 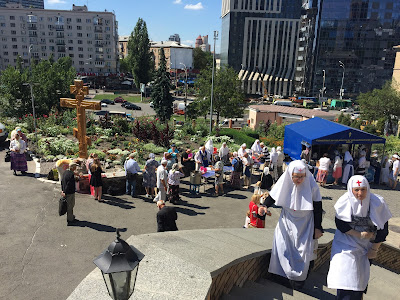 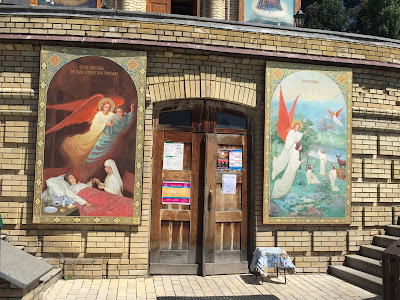 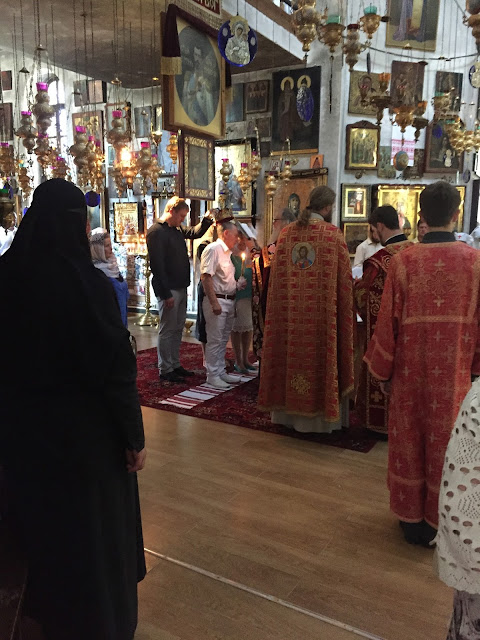 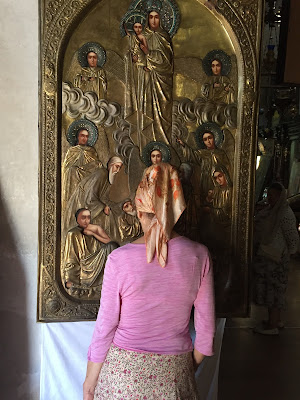 Images: Scenes from the church near the hotel.

We take the metro back to Maidan and do some more detailed exploring. We walk past the individual memorials to those killed in the February 2014 uprising near the clock and walk over the pedestrian bridge. We are reminded of how fresh these events really are. 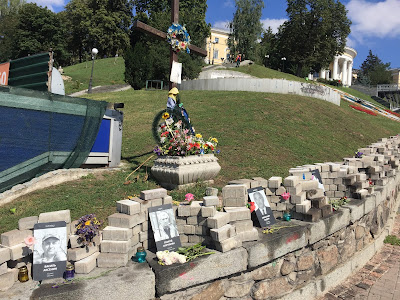 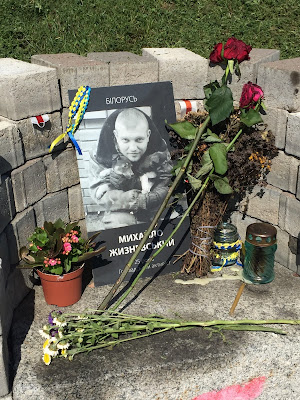 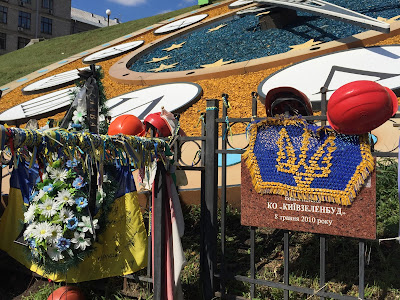 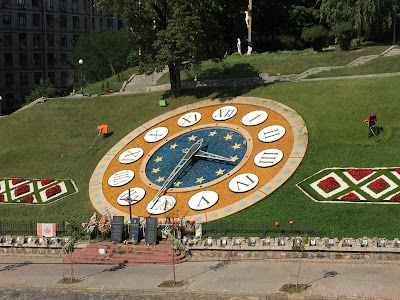 Images: Memorials to those killed in the Maidan revolution. Watch the "Winter on Fire" documentary on Netflix to understand the background.

We walk back to St. Michael’s Cathedral, where protesters took refuge in the uprising. We walk through the building and observe another worship service. I go to the bookstore trying to find a Ukranian Bible but am told they do not have any. I pick up a little guidebook, however, which explains that the original structure was dynamited and destroyed by the communists, the outbuildings and seminary turned into dorms and offices, and the cathedral only rebuilt and restored in 1998. I also later learned that there are three main Orthodox groups in Ukraine: the Moscow patriarchate, the Kiev patriarchate (of which St. Michael’s is the center), and the autocephalous. 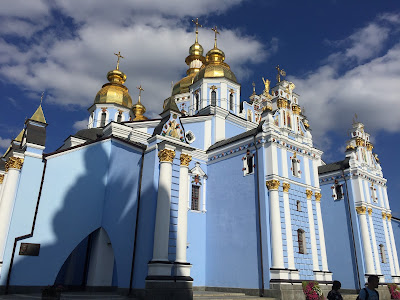 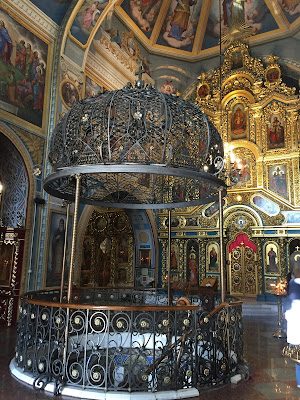 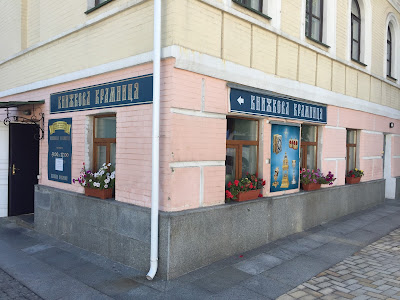 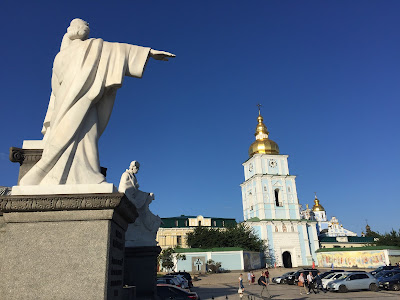 We made our way through the sprawling park behind the monastery grounds to the towering memorial to Volodymir the Great and then back on the street past the St. Alexander Catholic Church. The priest of this church was shot by the communists outside the building in 1927. The church was seized and turned into a planetarium during the Soviet era and only rededicated as a church in the early 1990s. 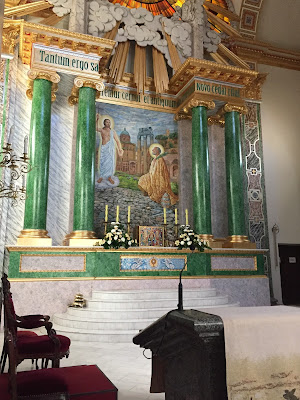 We did some more shopping in tourist places and grabbed a later supper at a restaurant near the “Golden Gate” before heading back to our hotel around 9:30 pm.

After another Hotel Rus breakfast buffet, we decided to watch again on Netflix the documentary about the 2014 Kiev revolution Winter on Fire (watch the trailer here). This is a powerful film and obviously very meaningful for us given the places we had seen in Kiev. If you have not seen it I highly commend it for understanding the current state of things in Ukraine. We caught the metro again and headed for the Arsenal stop, which is apparently the deepest underground subway stop in the world, serving as a nearly inpenetratable bomb-shelter during the Soviet era. From Arsenal, we walked through the park to the Holodomor Museum to the Ukranian victims of the Stalin era genocide (though whether it fits that technical definition is disputed by some). It is a somber place.  The exhibit claims up to 7 million Ukranians were intentionally starved to death on Stalin’s orders post-WW2. 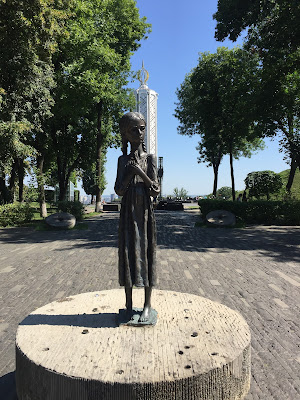 From there we walk to the Kiev-Pechersk Lavra (Cave Monasteries), another UNESCO world heritage site, and the center of the Moscow patriarchate Orthodox church. More beautiful buildings. We also strolled by the Ukranian memorial to those who served in Afghanistan (1979-1989). 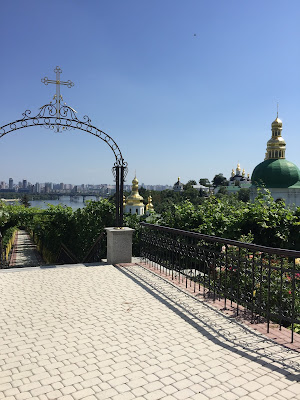 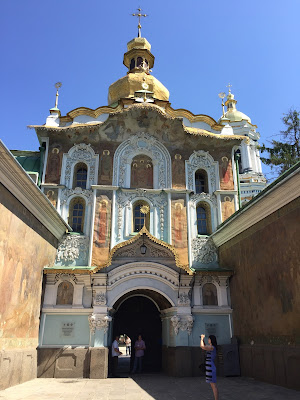 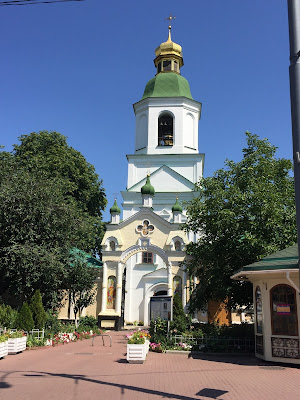 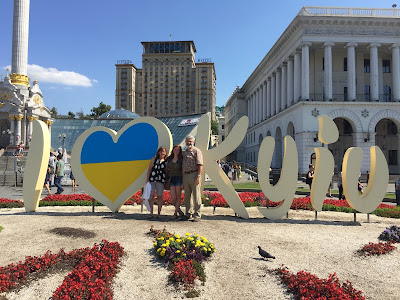 Image: Back in the city center.

We met Hannah for lunch in the city center at the Kiev outpost of Lviv Croissants, one of her favorite places to eat (and it was very good!). With her conference finished we were on our way to Kostopil. This involved going to the bus station and getting on a Mashrutka (small bus/van) with every seat filled, no a/c, and no open windows except for a roof vent for a warm ride westward to the city of Rivna where we switched to a different bus to take us to Hannah’s town of Kostopil. We reached our stop in Kostopil, a short walk from Hannah’s apartment, about 9:00 pm. After dropping off our bags we took the 10-minute walk into town and bought some food in grocery store for supper and breakfast, then headed back to her apartment for a light meal and sleep!

For Part Two of the Journal, look here.