Translation Note: 1 Corinthians 6:9 and the ESV 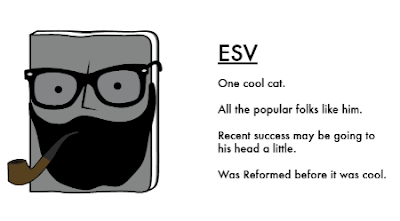 I led a Bible Study last Sunday afternoon at CRBC on the Bible and homosexuality.  In the survey of Biblical passages, we looked at 1 Corinthians 6:9-11 and focused on the last two terms in Paul’s “vice list” in v. 9, which the KJV renders as “nor effeminate, nor abusers of themselves with mankind.”  Lurking behind these English words are two Greek words:  malakoi (rendered “effeminate”) and arsenokoitai (rendered “abusers of themselves with mankind”).

The first of these two terms (malakoi) literally means “soft” and is understood here, thus, as “effeminate” or the one who takes the feminine role in the homosexual sex act.  The second term (arsenokoitai) is made up of the words for man and sexual intercourse, thus, is rendered here as “abusers of themselves with mankind” or one who takes the masculine role in the homosexual sex act.

We read several translations and noted the various ways modern translations used by evangelicals choose to render the two terms:

NIV (2011 ed.):  "nor men who have sex with men" (a footnote rightly explains that the phrase translates "two Greek words that relate to the passive and active participants in homosexual acts").

NASB:  “nor effeminate, nor homosexuals”

NKJV:  “nor homosexuals, nor sodomites”

One person in the study had a copy of the ESV and read this version of v. 9, which renders the two distinct Greek terms with a single clause, “nor men who practice homosexuality.”

The non-literal rendering here shows the ESV to be the legitimate daughter of the RSV which also combines the two terms, though it only uses one word, “homosexuals.”  Even the NRSV departs from its mother and sibling to translate the two Greek words independently:  “male prostitutes, sodomites” (cf. NIV).

The ESV’s rendering of the two distinct Greek terms in 1 Corinthians 6:9 with an indistinct, generic phrase illustrates its tendency to offer dynamic equivalence renderings that, IMHO, do not help the reader best understand what appears in the original and reveal its weaknesses as a translation, despite all the YRRs weighing down its bandwagon.

New International Version
1 Corinthians 6:9-11
9 Or do you not know that wrongdoers will not inherit the kingdom of God? Do not be deceived: Neither the sexually immoral nor idolaters nor adulterers nor men who have sex with men 10 nor thieves nor the greedy nor drunkards nor slanderers nor swindlers will inherit the kingdom of God. 11 And that is what some of you were. But you were washed, you were sanctified, you were justified in the name of the Lord Jesus Christ and by the Spirit of our God.

Thank you for the translation. This illustrates why it's important to attend services where things like this (your Greek translation) are learned. Learning the translation makes the Scripture clearer and easier to understand.

Keep up the good work, Pastor!

Thanks for the comment MJ and for the info.

I am assuming you are quoting a new edition of the NIV (I think done in 2011) which renders the two Greek words with the explanatory phrase: "men who have sex with men."

My citation of the NIV in the post is from the old version that is on my Bible software. I need to get the updated version of the NIV.

I think that the quotation came from BibleGateway. I used it because I'm loathe to look up the passage and type it in. Lazy, I guess. :)