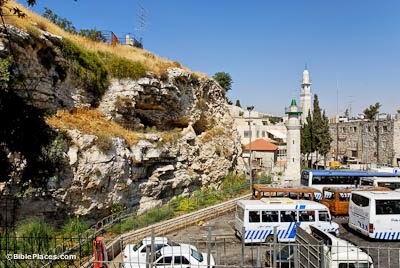 Image:  This rocky hillside in Jerusalem is known as "Gordon's Calvary" (because a man named Charles G. Gordon popularized this as the site of the crucifixion in the 19th century) and is thought by many to be the place where Jesus was crucified.  In the end, however, it is uncertain where precisely in Jerusalem the crucifixion took place.

Note:  Here are some notes from the exposition of Luke 23:33 from last Sunday morning’s sermon.

And when they were come to the place, which is called Calvary, there they crucified him, and the malefactors, one on the right hand, and the other on the left (Luke 23:33).

In v. 33 we have this brief, restrained picture of the crucifixion itself, which begins:  “And when they were come to the place called Calvary….”  The Greek word underlying “Calvary” is kranion, meaning skull.  The other Gospels call it by its Hebrew or Aramaic name which is Golgotha.  Compare:

John 19:17 And he bearing his cross went forth into a place called the place of a skull, which is called in the Hebrew Golgotha:

The English word “Calvary” appears only in Luke 23:33 in the NT, the KJV translators (as in the Geneva Bible) following Tyndale’s first English translation of the NT, taking it from the Latin word Calvaria.

We do not know for certain how it got the name of the “skull.”  Did its topography make it look like a skull at a distance?  Did it get this name because it was a place of death?  It was most likely not off in a corner but in a busy, well traveled place.  Again, the Romans wanted the Jews to see this.

Then, Luke simply says:  “there they crucified him.”  It is interesting that the beloved physician shows little clinical interest in describing what happened physically to Jesus.  This is the problem with those graphic portrayals of Jesus’ suffering, whether in medieval art or in modern film.  The point is not to feel sorrow for Jesus’ physical sufferings.  It is not to say, “Poor Jesus.”  It is, instead, to understand that it was on the cross that Jesus took upon himself the wrath of God for sin, so that those who trust in him would not be crushed by God’s wrath but that their lives might be hidden with Christ.
The historian Martin Hengel called crucifixion “the ‘slaves’ punishment’” of the Roman world.  When the Romans crushed the slave rebellion of Spartacus over 6,000 slaves were nailed to crosses along the Appian Way leading into Rome (Crucifixion, p. 55).
The Roman orator Cicero once compiled a list of the worst punishments.  In third place, he listed decollatio (beheading).  In second place, he listed crematio (burning).  And in first place, the summum supplicium (the penalty of penalties), he listed crux (the cross) (p. 33).

Hengel said that “crucifixion was a punishment in which the caprices and sadism of the executioners were given full reign” (p. 25).

Can anyone be found who would prefer wasting away in pain limb by limb, or letting out his life drop by drop, rather than expiring once for all?  Can any man be found willing to be fastened to the accursed tree, long sickly, already deformed, swelling with ugly weals on shoulders and chest, and drawing the breath of life amid long drawn-out agony?  He would have many excuses for dying even before mounting the cross (pp. 30-31).

Seneca was making reference to the fact that the victim was usually beaten to a pulp before he ever made it to the cross.  This was a severe “mercy” extended to him.

Luke does not tell us the shape of the cross, whether a T or X or the conventional cross we usually think of today.  That is not important for us to know.  From John’s Gospel and his description of the disciples seeing the wounds in Jesus’ hands and feet we know he was nailed to the cross.  One died in crucifixion by suffocation, exhaustion, and loss of blood.  The body was not far off the ground so passers-by might look the accused in the face.  But again Luke shows little interest in these details. This is not Mel Gibson’s The Passion of the Christ. The only thing Luke adds in v. 33 is that the malefactors were crucified on his right and on his left.  Compare:

John 19:18 Where they crucified him, and two other with him, on either side one, and Jesus in the midst.

Indeed, Jesus must be in the center at this place called Calvary.