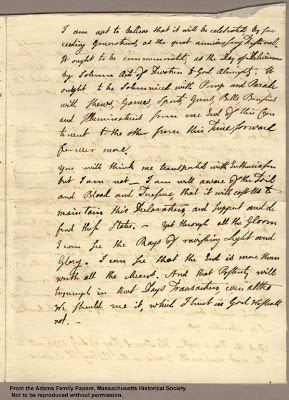 American founding Father John Adams wrote to his wife Abigail on July 3, 1776 regarding the adoption of The Declaration of Independence:

I am apt to believe that it will be celebrated, by succeeding Generations, as the great anniversary Festival. It ought to be commemorated, as the Day of Deliverance by solemn Acts of Devotion to God Almighty. It ought to be solemnized with Pomp and Parade, with Shews, Games, Sports, Guns, Bells, Bonfires and Illuminations from one End of this Continent to the other from this Time forward forever more.

Of course, at the time he wrote he thought the adoption of the declaration would be observed on July 2nd rather than the 4th, but his prediction of the manner of its celebration was still prophetic.  What is striking is that he thought the celebration should not only include “Bonfires and Illuminations” but also “solemn Acts of Devotion to God.”  Today we are thankful for our nation and the peculiar ways the Lord has blessed it.  As Paul admonished Timothy, we are to offer prayer for all men, including “kings, and all that are in authority” (1 Tim 2:1-2).  Today we honor that by praying for our nation and her leaders.

The United States is singular among the countries of the world for the civil rights iterated in our Constitution. In particular we have freedom of speech, freedom of movement, the right to bear arms and freedom of religion.

The most remarkable thing is that at the end of the revolution the people in power concluded that the power to govern belongs to the common man. The founding fathers then divested themselves of as much authority as they felt they could.

This is only one example of Divinity looking after the welfare of the U.S. World War II provides many more examples, and anyone who doubts the existence of the Lord need do nothing more than study WWII in detail to see clear evidence of Divine intervention.