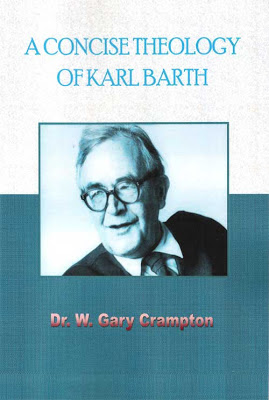 Karl Barth is considered by many to be the most important theologian of the twentieth century.  His massive, multi-volume Church Dogmatics continues to be read and studied.  Debate also continues as to whether Barth was a friend or foe for evangelicals and conservative Protestants.

Gary Crampton’s slim volume offers a concise summary, review, and analysis of the broad outlines of Barth’s thought.  He does so by reviewing Barth’s 1959 book Dogmatics in Outline, which offered a synopsis of his theology through an exposition of the Apostles' Creed.   In the end, Crampton offers the following conclusion:

Karl Barth was surely one of the twentieth century’s greatest thinkers.  Much of what he taught was in line with biblical Christianity. His theological views are very profound, and well worth studying.  As we have noted, however, Dr. Barth championed a neo-orthodox theology that, in some parts, is clearly antithetical to Reformed orthodox doctrine.  When one denies that the Bible is the infallible, inerrant God-breathed truth of the God of Bible, he denies the authority of God Himself who speaks in Holy Scripture, and, therefore, his conversion must be highly suspect.  Neo-orthodoxy is not biblical Christianity, and if followed to its logical conclusions it will lead one away from the true teaching of the Word of God into an abyss of logical paradox and teachings which are not in accord with the Word of God (p. 88).

Crampton’s book closes with an appendix titled “The Neo-Orthodoxy of Donald Bloesch” (pp. 90-103)  which analyzes Bloesch’s efforts to find a supposed “middle ground” between Barth’s neo-orthodoxy and evangelical orthodoxy in his two-volume Essentials of Evangelical Theology.  Crampton argues that the result is a view of Scripture that is “errant and dangerous” (p. 93).  It leaves him “without an epistemological foundation upon which to base his theology” (p. 90) and “mired in skepticism” (p. 103).

Crampton’s A Concise Theology of Karl Barth is commended to any who desire an accessible introduction to Barth’s theology from a traditional, Reformed perspective.  It also provides a caution and warning against the appropriation of Barth’s theology among those who would hold a high, confessional view of Scripture.