The Vison (9/20/12): Thoughts on the Doctrine of Justification by Faith 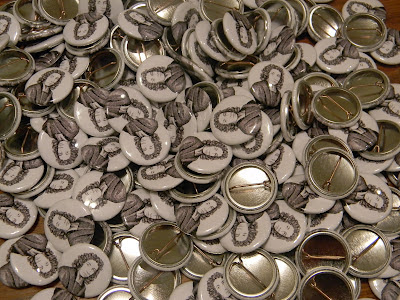 Image:  Benjamin Keach (1640-1704) buttons for participants in the upcoming Keach Conference.  Keach defended the Biblical doctrine of justification in works like The Marrow of True Justification.
Note:  The notes below are adapted from the exposition of Galatians 2:16 in last Sunday’s sermon.

The Protestant reformer Martin Luther called the doctrine of justification by faith “the article on which the church either stands or falls.”  Many hold the book of Galatians so dear, because, along with the book of Romans, it presents this great doctrine with such clarity.

Notice, in particular, that Paul draws a contrast in v. 16 between being “justified by the works of the law” and being justified “by the faith of Jesus Christ.”  The contrast is between two suggested means for achieving justification, a right standing with God.

The first is justification by the works of the law.  This refers to efforts to keep in full and without fault all God’s laws and commands.  The person who appeals to this means believes he will be justified by being a good person, or by living an exemplary moral life, or by meticulously following the teachings of his religion.

The sense here is that one is justified in God’s sight the instant he believes and trusts in Christ and Christ alone for salvation, fully abandoning and renouncing any false hopes that he will be justified by his works.  There are some things in the Christian life that are gradual and incremental, like progressive sanctification.  There are other things, however, that are punctiliar.  They happen at a definite point and nothing can ever alter this reality.  The Bible teaches that the moment a person trusts in Christ he is justified in God’s sight.  Nothing or no one can ever take that away from him.  Nothing can separate us from the love of God which is Christ Jesus our Lord (Romans 8:39).


There is a clear grammatical reason for this.  In v. 16 when Paul says “a man is not justified by the works of the law, but by the faith of Jesus Christ” he uses the preposition dia in the phrase “by faith.”  Dia can mean “because.”  When it has this meaning its object is in the accusative case.  But when its object is in the genitive case it has an instrumental meaning.  Here is it dia pisteos (with the noun faith, pistis, in the gentive case).  Our justification is not because we believe. It is the means God sovereignly uses to bring about our justification.  The point:  God even gives us our faith itself.  When we say that salvation is all of grace, we do mean all!