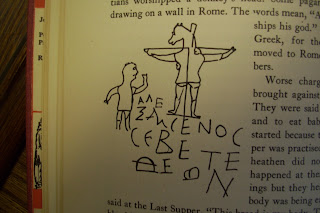 In last Sunday's message from Mark 15 on Christ's Suffering, I made mention of this crude drawing archaeologists found scratched on a wall in Rome. The photo above comes from Roland H. Bainton's book Faith of Our Fathers (Scribner's, 1944): p. 14. Historian Martin Hengel also makes reference to this graffiti in his classic book Crucifixion (Fortress, 1977) as an example of pagan animosity toward the scandalous preaching of Christ crucified:
There is an admirable illustration of this in the well known caricature of a crucified figure with an ass's head from the Palatine with the inscription 'Alexamenos worships god' (Alexamenos sebete [=sebetai] theon). There should be no doubt that this is an anti-Christian parody of the crucified Jesus. The ass's head is not a pointer to some kind of gnostic Seth-worship, but to the Jewish derivation of the Christian faith. One of the regular themes of ancient anti-Jewish polemic was that the Jews worshipped an ass in the temple (p. 19).
As the Apostle Paul put it:
1 Corinthians 1:22 For the Jews require a sign, and the Greeks seek after wisdom: 23 But we preach Christ crucified, unto the Jews a stumblingblock, and unto the Greeks foolishness; 24 But unto them which are called, both Jews and Greeks, Christ the power of God, and the wisdom of God. 25 Because the foolishness of God is wiser than men; and the weakness of God is stronger than men.
JTR
Posted by Jeffrey T. Riddle at 4:47 PM

Hi Pastor Jeff,
Can you please tell me more about this picture or send me the full reference of the Roland H. Bainton's book? I didn't find the book. Thank you. Campinas - SP, Brazil.

I checked the Bainton book and it does not have a direct citation. The book is written for juveniles and does not have scholarly footnotes but a general bibliography at the end. I searched online and found an article on wikipedia (search "Alexamenos graffito") with a photo of the original drawing that was made on plaster near the Palatine Hill in Rome. According to the article, it is now in Palatine Antiquarian Museum. Here's the address for the wikipedia article: http://en.wikipedia.org/wiki/Alexamenos_graffito

The Book by J. Stott, "The Cross of Christ" provides some details to the caricature: "This is well illustrated by a graffito from the second century, discovered on the Palatine Hill in Rome, on the wall of a house considered by some scholars to have been used as a school for imperial pages. It is the first surviving picture of the crucifixion, and is a caricature. A crude drawing depicts, stretched on a cross, a man with the head of a donkey. To the left stands another man, with one arm raised in worship. Unevenly scribbled underneath are the words ALEXAMENOS CEBETE (sc. sebete) THEON, ‘Alexamenos worships God’. The cartoon is now in the Kircherian Museum in Rome. Whatever the origin of the accusation of donkey-worship (which was attributed to both Jews and Christians), it was the concept of worshipping a crucified man which was being held up to derision."