The Rebelution "Do Hard Things Tour" 2008: A Review and Critique 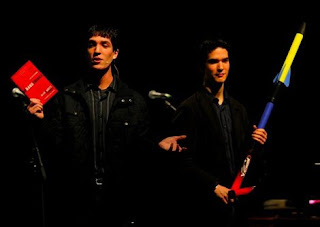 I attend the Harris' church. What's also disturbing is that Mr. Harris and sons highly emphasized the amount of people who came forward for decisions for Christ at these rebelution tours.

That very tactic of "peer-pressuring" decisions for Christ has happened in many evangelical youth group conferences (one I witnessed first-hand back in the 80's), and it's funny that Harris/co. really put down youth groups because their church is FIC, but engage in the same tactics that some "youth ministries" do in order to gain some kind of spiritual "credibility" or something.

For some of us, just dealing with all their self-promotion and exclusivity in homeschooling/self-business lifestyle is 'doing hard things'.

Thank you for your thoughtful critique, I so appreciate your insights and the way in which they were presented.

Some thought-provoking notes here...Thanks for sharing your honest perspective.

I've attended a couple Rebelution conferences, and they were excellent. I'll go again if I have the chance. But I would agree with some of your concerns.(I wasn't especially comfortable with the "stand up" salvation, or all of the music.)

I guess it depends on your perception, but I thought the "marketing" was honestly encouraging people to take in other good, meaningful books and teaching, just like when you read a really good book and tell all your friends. The fun seemed in good balance with the seriousness and I came away with the message loud and clear.

I will say that Alex & Brett are not "teen heartthrobs" in either presentation or actions. I'm casually acquainted with them and they are kind, genuine guys with a humble spirit about them. Everything was handled maturely, and while there were all the autographs and pictures, many people also wanted to engage in meaningful conversation or share how something spoke to their hearts. It makes a difference that the twins really take time to talk with everyone.

Sorry so long. You got me thinking...

I am sorry to hear that the Rebolution is using rock music, I agree with you the whole udercurrent of this kind of music detracts from the message. I am also disappointed to hear they use an altar call. Nevertheless their message is a good message which has inspired many young people. As a homeschooling mother myself I kn ow we can all be guilty of inconsistancies. Sometimes I feel that people judge homeschoolers with higher standards than they judge others.