In Zeus They Trust 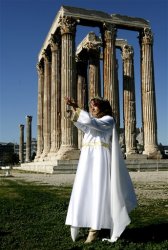 An AP story the other day reported that a group of modern pagans reinstituted worship of Zeus in Athens for the first time since the 4th century AD.

The comments of these neo-pagans sound more like those of politically correct moderns than what you might read from Zeus' faithful in Homer.
Apparently "ecological awareness" was key for the Greeks. The modern hymns of praise to Zeus stressed "the brotherhood of man."
One leader concluded: "We do not believe in dogmas and creeds, as other religions do. We believe in freedom of thought."
What was it G. K. Chesteron said? "When people stop believing in God [the God of the Bible], they don't believe in nothing--they believe in anything." When Paul, the Jew who had come to believe in Jesus as Messiah, came to ancient Athens, he said, "Men of Athens, I perceive that in all things, you are very religious.... Therefore, the one whom you worship without knowing, Him I proclaim to you" (Acts 17:22-23). He proceeds to preach Jesus crucified and raised and coming as Judge. The crowd mocked Paul but at least two hearers--Dionysius and Damaris--were converted to faith in Jesus (see v. 34).
JTR
Posted by Jeffrey T. Riddle at 2:17 PM