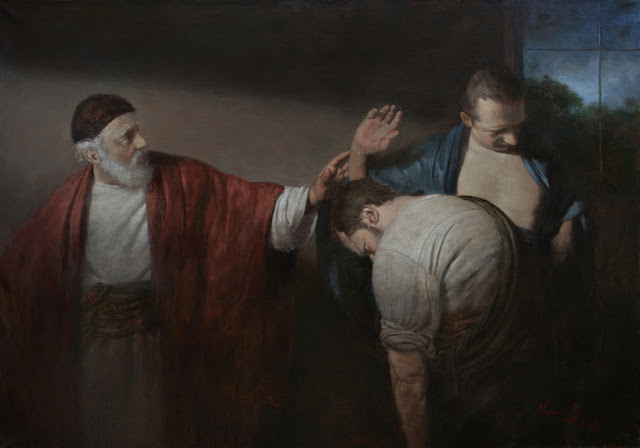 Matthew 21: 28 But what think ye? A certain man had two sons; and he came to the first, and said, Son, go work today in my vineyard. 29 He answered and said, I will not: but afterward he repented and went.

In Christ’s Parable of the Two Sons (Matthew 21:28-31), Christ begins by describing the command given by the father to the first son (v. 28). Notice four things about this command:

First, the father begins by appealing to this first child as his “Son.” Sons are expected to obey and honor fathers (see the fifth commandment, Exod 20:12).

Second, he does not issue a request but a command. He does not say, Son if you have the time and you’re not too busy, would you be so kind as to go into the vineyard for me? Pretty please with sprinkle on top. No, he extends two imperatives, Go! Work!

Third, notice the urgency of the command. Not, if and when you have time. Not, by the end of the week or month. But “today.” This recalls David’s words in Psalm 95, “Today if ye will hear his voice, harden not your heart” (vv. 7-8).

Fourth, he provides clear direction as to where the son is to go and labor (the sphere of is labor), “in my vineyard.” Any reference to a vineyard recalls those scenes from the OT, as in Isaiah 5, when the Lord presents himself as the owner of the vineyard, and the vineyard as the “house of Israel.”

We then have the response of the first son (v. 29). He answers his father, “I will not.” This is a perfect representation of the exercise of man’s free will. Man has a free will. Only problem is that it is in bondage to sin, so that when God the Father commands, sinful men respond, I will not!

In this case, however, we are next told that some change overcame the first son. We are not given any reason or explanation for this change. There is no record of angst or guilt or pangs of conscience. There is just a change: “but afterward he repented…” The word here for “to repent” is not the word typically used for the turning away from sin and self and toward God (metanoeo), but another (metamelomai) that appears less frequently and is associated with a sense of regret. It is used in Matthew 27:3 to describe how unconverted Judas “repented himself” or was filled with remorse for betraying Christ.

Finally, it says, he “went” out into the vineyard to labor for his father, even though he had initially refused (v. 29).

There is something in this account of the first son that is applicable to the experience of every believer. The Father calls us and commands that we serve him. The response of every unconverted man is, I will not. Then, however, the Lord is pleased to bring about repentance and leads the child of God to respond in obedience.

Let us listen to the Father’s commands and obey him.

I think this is an excellent post. Not to pull the text beyond its bounds, but I also think of this in light of contentment. So many times we aren't content as to the station God has called us to. Having been raised in this secular culture, I was taught that true success only comes to those in high stations (ex. President, King, Governor, Pastor, etc...). It also has skewed how we are to look at pastors and their position (Matt. 23:11-12). So many of the ways we see things has been influenced by Secular and Enlightenment Era thinking to the point it has corrupted the watering hole. The son who eventually obeyed could have thought that the work was beneath him, or maybe that he was just being lazy. Either way, he wasn't content to what his father desired. How easy it is for us to do the same. How we need Divine help in seeing the value of where God has placed us! Thank you for this!