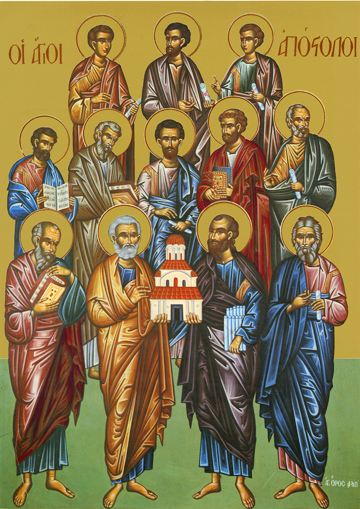 Now the names of the twelve apostles are these…. (Matthew 10:2).

Let me offer at least five observations on Matthew’s listing of the twelve (Matthew 10:2-4):

First: Though Christ had many disciples, even thousands, who were following him, he set apart but twelve to special service as apostles.

The number twelve had he spiritual significance (cf. Matt 19:28). It also tells us that Christ as a true man had close friendships. The Gospels tell us that even beyond the twelve he had a special bond with three disciples (Peter, James, and John), and John’s Gospel tells us that perhaps his closest friend was John himself, the beloved disciple.

This reminds us that the Christian faith is a common faith. We are not islands. We do not go it alone. We need fellow travelers on this journey to aid us on the way. We need fellow laborers. Many hands make light work.

Second: Though Jesus had women disciples (followers) during his ministry (Mary and Martha of Bethany, for example), the twelve were all men. Only men were set apart to this extra-ordinary office, just as only men will be set apart to the offices of elder and deacon (cf. 1 Timothy 3). Men and women are spiritual equals before God, but they are not the same. God, in his wisdom, requires that only qualified men service as officers.

Third: Many of these men were brothers in the flesh. How wonderful it is when siblings share a like precious faith in the Lord.

Fourth: One of the twelve betrayed Christ. One wonders what power was given to Judas. Did he preach sermons, cast out demons and heal the sick in Christ’s name? This reminds us that one can have the name of disciple and even fill an office in the church and yet be unconverted. That should make us tremble.

Fifth: These were ordinary men whose lives were changed by their encounter with and calling to serve Christ. They included fishermen, a tax collector, and a political zealot.

It has often been given as a proof both for the truth of the Christian faith and the reality of the resurrection, that these ordinary men turned the world upside down. In Acts 4:13, Luke records the reaction of the religious leaders to the preaching of the apostles, as they perceived “they were unlearned and ignorant men” but “they took knowledge of them, that they had been with Jesus.” It remains true today that when men are around Jesus, they are transformed by him.

These men were even willing to lay down their lives for Christ. James the son of Zebedee was the first apostle to die as a martyr (see Acts 12:1-2). Christ himself prophesied that Peter would lay down his life (see John 21:18-19).

You don’t lay down your life for a fairy tale or a myth, but you will gladly lay it down for the truth of God.