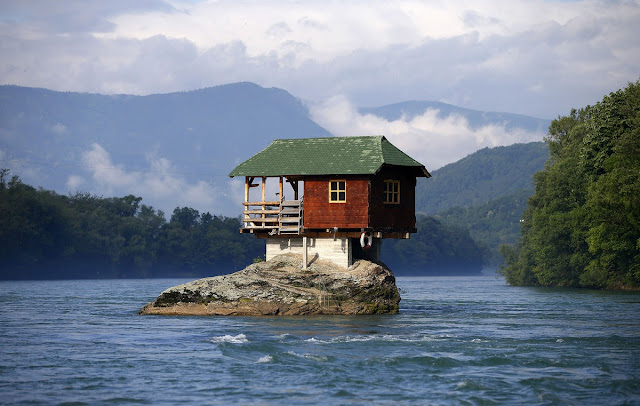 Image: A house built on a rock on the Drina River, near the western Serbian town of Bajina Basta.

And the rain descended, and the floods came, and the winds blew, and beat upon that house; and it fell not: for it was founded upon a rock (Matt 7:25).

In the climactic parable of the wise and foolish builders which concludes the Sermon the Mount, Christ begins with the wise man who built his house upon a rock (Matt 7:24). He then describes how natural hardships came upon that house (v. 25: rain, flood, wind).

Notice two things about this description:

First, the things that fall upon this house are not unusual things. We might even say they are ordinary things. Build a house and rain will fall. Waters will rise. Wind will blow.

Second, the wise man’s house was not exempt from these occurrences, because he was a wise man (a disciple of Christ). The implication here is that the man who hears Christ’s words (in a saving manner) and obeys his word, as an outward fruit or evidence of salvation, will not be exempt from the ordinary trials of life. Recall 1 Corinthians 10:13, “There hath no temptation taken you but such as is common to man….”

This part of the parable dismantles any notion of the health, wealth, and prosperity gospel. Christians are not exempt from hardship. In fact, being a Christian will often bring special hardships. Christ himself taught, “In the world ye shall have tribulation: but be of good cheer; I have overcome the world” (John 16:33).

But notice the last word about the wise man’s house: “and it fell not.” Christ provides this explanation: “for it was founded upon a rock [petra].”

What is meant here by the term “rock”? Later in Christ’s ministry at Caesarea Philippi, he will ask his disciples, “But whom say ye that I am?” (Matt 16:15). Simon Peter will answer, “Thou art the Christ, the Son of the living God” (v. 16). Christ will respond that “upon this rock [petra] I will build my church; and the gates of hell shall not prevail against it” (v. 18). The “rock” is Peter’s confession that the Lord Jesus is the Christ, the Son of the living God.

To build one’s house upon a rock is to build one’s life upon the confession of faith that the Lord Jesus is the Son of the living God. He is the Rock. The wise man builds his life on Christ.