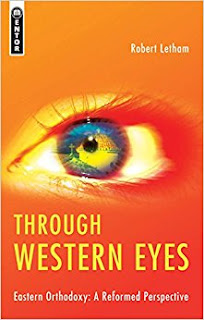 I’m reading Robert Letham’s Through Western Eyes: Eastern Orthodoxy: A Reformed Perspective (Mentor, 2007). In an interesting chapter on icons, Letham notes, “The Orthodox claim that the first icons date from the lifetime of Jesus” (p. 145). He adds that to support their use of icons the Orthodox appeal to intriguing references in Eusbeius’s Ecclesiastical History to visual representations of Jesus and the apostles which existed in his day and which Eusebius claims went back to the earliest days of Christianity.

In EH 7.18 Eusebius claims that in Caesarea Philippi the woman with the issue of blood who had been healed by Jesus erected a stone memorial to this event in front of her home. It included “a brazen figure in relief of a woman, bending on her knee and stretching forth her hands like a suppliant.” Opposite to this was “an upright figure of a man, clothed in comely fashion in a double cloak and stretching out his hand to the woman.” He adds, “This statue, they said, bore the likeness of Jesus. And it was in existence even to our own day, so that we saw it with our own eyes when we stayed in the city.” Eusebius observes that one should not be surprised that grateful pagans “should have made these objects, since we saw the likenesses of his apostles also, of Paul and Peter, and indeed of Christ himself, preserved in pictures painted in colours.”

What do we make of this description? Does it justify the use of icons? No. More likely it shows how quickly corruption had entered into “Christian” practice. It does not reflect Christianity of the first century but the fourth century. In EH 7.19 Eusebius adds that “the throne of James” was also preserved and revered by men of his day. We see already the rise of relics and religious objects, usurping the simplicity of Biblical spirituality. Already, we see movement away from the written word and the mind to the visual and emotional. Letham notes, “there is no evidence in the Bible that pictures of saints were expected to be located in the place where the church worshipped, still less was this required. This is a development additional to Scripture” (p. 157).

I have been studying on the Eastern Church for a little over a year. I have been reading some of their commentaries and books. I can say that there are many good things coming out of the Orthodox Church in America, and I would argue that they are much closer to Biblical Christianity than their Roman Catholic counterparts. Recently Hank Hanegraaf was Chrismated into the Orthodox Church and that event has caused much confusion and intrigue. I was almost sucked into their vortex also because for a time I accepted the Septuagint over the Masoretic text. However, after a more careful study and examination of the evidence, I see that the Reformed Confessional route is much closer to true Orthodoxy (and the Masoretic Text!). The Lutherans of Germany tried to reach out to the Orthodox Church during the Reformation, but didn't align with them for many good reasons, some of which you mention here. I appreciate your attention to this, because there is a growing movement of people fleeing to the Orthodox Church due to its stability, history, and Liturgy. As James White likes to say, "They are drawn in by the smells and bells!" Thank you for sharing this post.

Hi Phil, thanks for sharing this comment. I agree that I'd prefer Eastern Orthodoxy to RC. As you note, however, among many other things, there are some major issues with EO with Scripture, including not only their acceptance of the LXX over the Hebrew MT of the OT but also the definition of the canon. I've had more interest in learning about Orthodoxy recently since my daughter is living in a majority Orthodox country (and attending a Baptist church there). I agree that many "evangelicals" eventually tire of the shallowness found in their churches and lack of clear authority and orderliness in ecclesiology and are then drawn to EO and RC. I think there is a better alternative, of course, to be found in Reformed faith and practice. I would commend Letham's book, if you've not run across it already. JTR

I live in a majority "Orthodox" country (Russia). I would not necessarily agree that EO is "much closer to Biblical Christianity" than Roman church-state. How can apophatic mystical epistemology (rather obscurantism) coupled with the denial of "juridical paradigm" of viewing redemption, be possibly closer to Biblical Christianity at the center of which stands the Good News of free pardon of guilty sinners in Christ, Who became our legal substitute and sin bearer?

I don't want to speak for Phil, but maybe he was thinking of things like EO rejection of the RC view on the pope, RC views on purgatory, and RC Marian dogma as being closer to Biblical Christianity. As stated, these notwithstanding, there are still major problems with both EO and RC from a Reformed perspective. JTR