Thomas Watson: "Many dig their grave with their teeth." 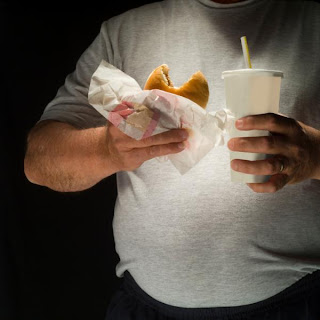 Thomas Watson's musings on the Sixth Commandment include the typical Christian interpretation that the commandment forbids suicide.  Watson pushes even further.  According to him, we violate this commandment when we do not exercise proper stewardship over our bodies.  "Many dig their grave with their teeth."

Watson says, one may be guilty of self-murder "indirectly and occassionally":
(1)  When a man thrusts himself into danger which he might prevent. If a company of archers were shooting, and one should put himself in the place where the arrows fly, so that an arrow kills him, he is accessory to his own death. In the law, God would have the leper shut up, to keep others from being infected. Lev 13: 4. If any should be so presumptuous as to go to a leper, and get the plague of leprosy, he might thank himself for his own death. (2) A person may be guilty of his own death, in some sense, by neglecting the use of means for preserving life. If sick, and he uses no remedy; if he has received a wound, and will not apply a cure, he hastens his own death. God commanded Hezekiah to lay a ‘lump of figs upon the boil.’ Isa 38: 21. If he had not done so, he would have been the cause of his own death. (3) By immoderate grief. ‘The sorrow of the world worketh death.’ 2 Cor 7: 10. When God takes away a dear relation, and any one is swallowed up with sorrow, he endangers his life. How many weep themselves into their graves! Queen Mary grieved so excessively for the loss of Calais, that it broke her heart. (4) By intemperance or excess in diet. Surfeiting shortens life. Plures periere crapula, quam gladio [More perish by drink than by the sword]. Many dig their grave with their teeth. Too much oil chokes the lamp. The cup kills more than the cannon. Excessive drinking causes untimely death.
JTR
Posted by Jeffrey T. Riddle at 6:46 PM