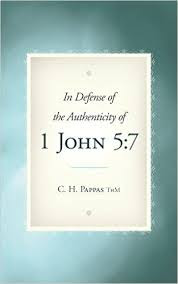 Note:  An audio version of this review can also be heard here.

One of the results of the current overwhelming dominance, one might even say tyranny, of the modern critical Greek text of the New Testament over the minds of scholars, even in conservative evangelical and Reformed circles, has been the rarity of works which attempt to defend disputed traditional texts.  Admittedly, among the most disputed and the most difficult for traditionalists to defend is the so-called Comma Johanneum (CJ) or the “three heavenly witnesses” passage found in the second half of 1 John 5:7.  Many modern translations simply omit the verse’s second half without even adding a footnote to explain its absence (see the ESV)!  Into such a context comes a rare volume, C. H. Pappas’ contemporary effort to defend the traditional reading of 1 John 5:7.

Pappas writes as a pastor-theologian.  He has served for over thirty years as minister at Collins Road Baptist Church in Jacksonville, Florida.  His discussion is not pitched at a technical but at a popular level:  “It is not written for the scholar but for the people who sit in the pews” (p. xxii).   Though it is clear that he prefers the KJV and advocates for it as an English translation, his defense of the CJ is not that of a KJV-Onlyist in that he defends the passage on the basis of the Greek text.

Here is a summary of some of Pappas’ arguments for the CJ on external, internal, as well as theological grounds:

2.  The CJ is found in Old Latin manuscripts (which Pappas associates with the Waldensians), which can be dated very early and demonstrate its antiquity.

3.  The CJ was known and cited by several early Church Fathers, most notably by Cyprian, Tertullian, Augustine, and Priscilian (in the Liber Apolegeticus).  Pappas defends the latter, in particular, from the charge of being a heretical source (see pp. 15-16).

4.  The CJ was suppressed in the Eastern church and, therefore, in many of the early Greek manuscripts due to the Arian controversy.

5.  The CJ eventually came to be accepted and acknowledged as part of the legitimate text of Scripture by the universal, faithful church and was included in the traditional printed texts of the Greek NT and in the vernacular translations which emerged from the Protestant Reformation.

6.  In modern times, the CJ only came to be widely challenged and removed from the Greek text of the NT and from translations after the work of Westcott and Hort and the revision committee (which included a Unitarian influence) in 1881.

7.  The CJ is even accepted by the modern Greek Orthodox churches as part of the legitimate text of Scripture.

8.  The CJ can be defended on internal grounds.  The masculine gender usage in 1 John 5:8 only makes sense grammatically if the traditional text of 1 John 5:7 is original.

9.  The appearance of the CJ as a marginal note in some Greek manuscripts can be just as plausibly explained as an attempt to correct a copying error of omission, rather than as an attempt to insert something that was not in the original.

10.  If the CJ was not original and it was inserted into the text by pious but misguided scribes who wanted to strengthen their argument for the Trinity, we would expect to find evidence of both Arians and orthodox Christians who would most certainly have protested against such an insertion.  There is no record of any such protests.

11.  The omission of 1 John 5:7 in the modern era came as the result of the application of the modern historical-critical method to Biblical studies and to the development of source and form criticism.  This modern method is not compatible with the traditional view of the divine preservation of Scripture.

Though firm in his defense of the CJ and clear in his rejection of the modern critical text, Pappas largely avoids ad hominem attacks and uncharitable outbursts.  There are, however, still a few statements like this one:  “Enough of the so-called early manuscripts!  They survived only because they were not used.  They were not used because they were heretical!  Burn them!” (p. 79).  On the other hand, at the book’s conclusion he urges his readers who reject modern translations not to do outrageous stunts like burning modern translations:  “This is utterly foolish” (p. 97).

One might wish that some of Pappas’ arguments had been more clearly and ably exposited.  The author is primarily dependent on a limited number of secondary sources.  His arguments are often repetitive.  There are a number of historical simplifications, overstatements, unsubstantiated claims, and outright errors.  For example, Pappas several times asserts that the CJ had not been at all challenged in the modern era until Westcott and Hort in 1881 (e.g., “Interestingly enough, it was not until 1881 that the Comma was ever questioned” [p. 17]).  In fact, the CJ was challenged by intellectuals as diverse as Isaac Newton [see An Historical Account of Two Notable Corruptions of Scripture In A Letter To A Friend by Sir Isaac Newton (London:  John Green, 1841)] and Edward Gibbon [George Travis, Letters to Edward Gibbon, Esq. Author of the History of the Decline and Fall of the Roman Empire, Third Edition (London, 1794)] in the eighteenth century not to mention by Biblical scholars of that era.   The first published Greek NT to challenge the Textus Receptus (including the CJ) was not Westcott and Hort’s in 1881 but Karl Lachman’s in 1831.

Despite the book’s shortcomings on a scholarly level, there remains significant merit in thoughtful examination of many of the issues which Pappas raises and pondering of the questions he poses relating to the modern omission of 1 John 5:7 from the text of Scripture.  The best challenges are, in fact, the theological ones, like this one:

The issue before us is obvious:  it is not a matter of a preference for a translation.  The issue is a battle for the Bible!  If one text can be removed from the Scripture, who is to say that another shall not be removed? (p. 85).

The book is particularly welcome given that there are so few voices in our day who are asking these questions, raising these issues, and offering any challenge against the dominance, one might even say tyranny, of the modern critical text.